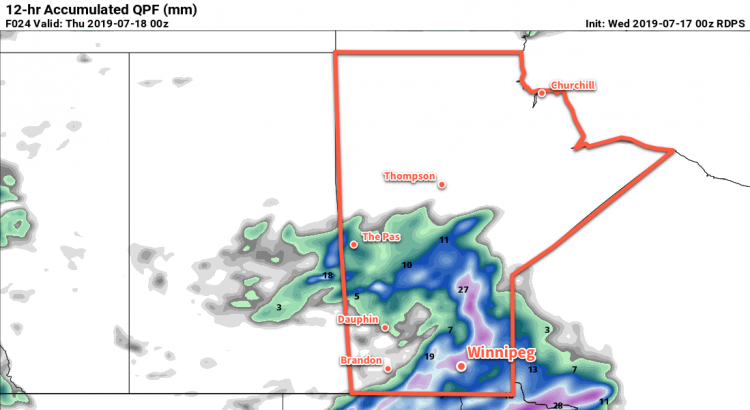 The dry conditions of just a couple weeks ago are almost a distant memory with more showers and thunderstorms possible through the second half of the week.

More showers are on the way for Winnipeg later today. The city will see cloudy skies as a low pressure system works its way across the province. By midday, scattered to widespread showers will develop ahead a trough of low pressure with the chance of embedded thunderstorms. The unsettled conditions should clear out by late in the afternoon with the skies clearing out a bit after that.

Temperatures will be cooler today; Winnipeg will have southerly winds to around 20 km/h and a high near 23°C. It will continue to be a bit muggy today with dew point temperatures near 18°C with only slight relief tonight. The city will see a low near 16°C with partly cloudy skies.

Thursday will be a bit of a tricky weather day over the region. Warmer weather will return to Winnipeg with temperatures climbing to around 28°C with muggy dew points near 18 or 19°C. Winds will pick up out of the southwest into the 20 to 30 km/h range.

The southwesterly flow over southern Manitoba will push a broad frontal wave into the province. As it moves into place, a low pressure system will push into western Manitoba from Saskatchewan. The interaction of these two systems will produce a conditional threat of thunderstorms over the region late in the day. There will be a chance that these thunderstorms, should they form, could be severe. Unfortunately, the subtle nature of the interactions that will lead to thunderstorm development can’t be forecast with too much accuracy this far out. Be sure to check out ECCC’s thunderstorm outlook on our Bulletin Viewer on Thursday morning for a complete discussion on the day’s thunderstorm potential.

Once the thunderstorm threat diminishes on Thursday evening, the city will see partly cloudy skies with temperatures heading to a low near 15°C. Winds will persist out of the southwest near 20 km/h through the night.

Partly cloudy skies will be in place for Winnipeg on Friday, although cloudier conditions won’t be too far to the north. Temperatures will reach a high near 24°C with westerly winds of 30 gusting 50 km/h. Of note will be that those westerly winds will finally flush the humidity out of the region, bringing a return of more comfortable conditions.

Winnipeg will see a few clouds on Friday night as winds ease and temperatures drop to a low near 13°C.

Winnipeg will see variable cloudiness this weekend with a chance of a few showers on Sunday. Settled conditions will move in after that with plenty of sunshine through next week. Temperatures will be near-seasonal through the weekend, but a warm-up is forecast by mid-week with daytime highs returning to the 30°C mark. Humidity levels are forecast to stay low through much of next week.