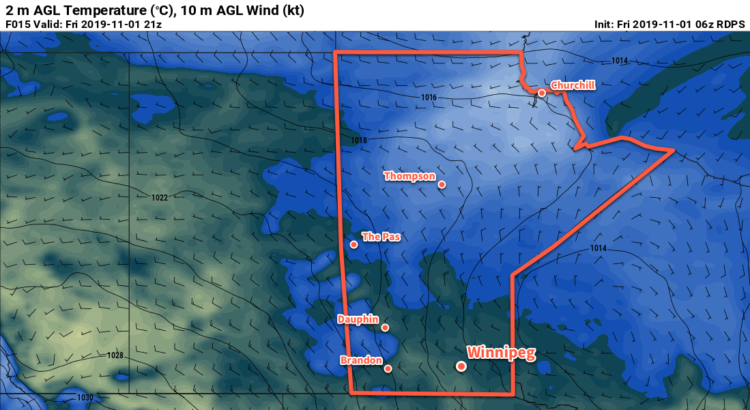 A series of disturbances moving through Manitoba will keep temperatures near the freezing mark through the weekend with plenty of cloud cover.

Winnipeg will see light snow today as a broad upper low moves through the region. Accumulations will be low and temperatures mild with a high near +1°C. Winds will be noticeable, though, picking up out of the northwest to around 30 gusting 50 km/h. The snow will taper off this evening leaving the city with mixed skies overnight and a chance of flurries. Temperatures will dip to a low near -5°C with winds out of the northwest at 20 km/h.

Saturday will bring mainly cloudy conditions to the city as the winds ease and the cloud cover remains trapped under a ridge moving through the province. Temperatures will once again climb above freezing to a high near +2°C. While there might be a sunny break or two through the day, the clouds will thicken back up overnight as another weak low moves across the province. Temperatures will dip to a low near -3°C with a chance of flurries on Saturday night.

Winnipeg will see cloudy skies on Sunday with a northerly wind of 20 to 30 km/h in the morning that eases later in the day. Temperatures will be a tad cooler with a high near 0°C. More flurries are possible on Sunday night as another low pressure system crosses through the province. Temperatures will dip to a low near -3°C with northwest winds again strengthening to around 30 km/h.

Unfortunately, that last low looks like it could be a bit of a doozy with a strong cold front that ushers a much colder Arctic air mass in to the province. By mid-week, the region could be seeing daytime highs in the low minus single digits and overnight lows in the mid-minus teens. No significant snowfall will occur with the transition into the colder air mass.

Today’s seasonal daytime high in Winnipeg is +3°C while the seasonal overnight low is -6°C.