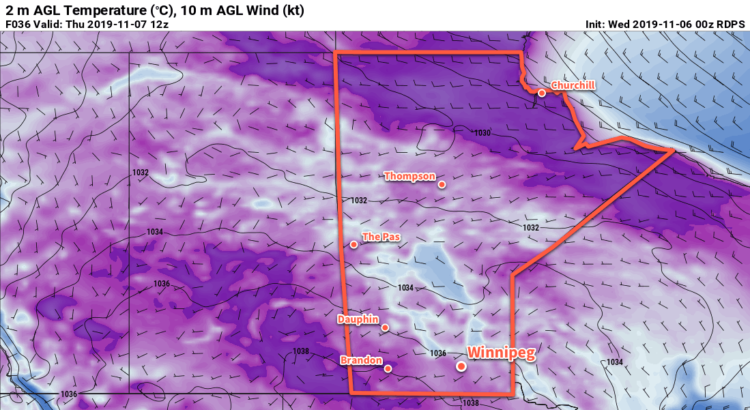 Winnipeg will see more of the same through the remainder of the week with temperatures well below seasonal values and occasional snow.

Another Arctic ridge building into the province will bring more cold weather through the rest of the week. As it approaches today, brisk northwest winds near 30 km/h will keep temperatures cold with a high near -5°C. Winnipeg will see mixed skies with a continued chance for flurries that will be streaming off of Lake Manitoba. The winds will ease tonight as the ridge moves into the region. Skies will clear overnight with temperatures dipping to a low near -16°C.

Winds will stay light through the day on Thursday, gradually shifting to the south later in the day. The city will again see a high near -5°C today, but skies will be partly cloudy (a welcome change!). A warm front will approach the region on Thursday night, bringing cloud into the region and keeping overnight lows milder. Winnipeg will see a low near -8°C overnight with winds increasing out of the south to around 20 km/h.

The warmer air arrives for Friday in southern Manitoba with highs climbing back to around the -1°C. Still below seasonal for this time of year, but only slightly. Skies will be cloudy with a southerly wind of 20 to 30 km/h easing in the afternoon as a trough moves into the Red River Valley. There will again be a chance for a bit of light snow as well, but any notable accumulation is unlikely. Skies will stay cloudy with a continued chance of light snow on Friday night. Temperatures will dip to a low near -6°C.

The near-seasonal conditions will stick around for Saturday with a slight chance of some light snow as well. A cold front will move through the region on Saturday and open the door for a renewed blast of Arctic air. Highs will be nearly 10°C colder on Sunday with a high near -10°C. Overnight lows will follow suit, too, dropping into the mid minus teens. The first half of next week looks to continue the cold weather before a slight moderation occurs mid-week.

Today’s seasonal daytime high in Winnipeg is 2°C while the seasonal overnight low is -6°C.