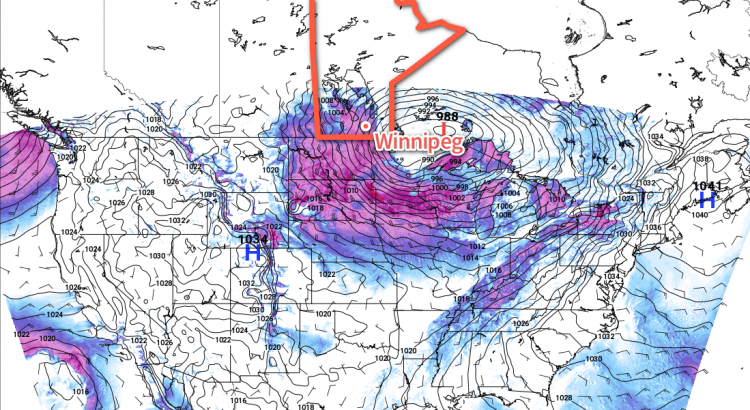 The blizzard that has brought much of southern Manitoba to a halt will end today, making way for much calmer weather.

The crippling blizzard that began last night will gradually end today. Winds this morning will be northwesterly at 40 km/h gusting to 60 km/h, decreasing as the day progresses. Snowfall will end from west to east across southern Manitoba this morning, which will also help to improve visibility. Skies will remain cloudy through the afternoon, with just a lingering chance of flurries. Roads beyond the major routes will likely be impassable today as snow drifts will be significant in many exposed areas. Luckily, calmer weather is expected for the rest of the week, giving folks a chance to recover from yet another significant December blizzard.

Tuesday will be a fairly typical winter day with high temperatures in the mid minus teens and a mixture of sun and cloud. Winds will be fairly light, helping to keep wind chill values at bay. Thankfully, this should provide decent weather for those still shoveling out from the storm.

A rapid warm-up will occur on Wednesday as a fast-moving system pushes a warm front across southern Manitoba. This front will push temperatures up close to the freezing mark in many areas, although temperatures for most of the day will be just below zero. This frontal passage may be associated with a bit of snow, but amounts will be small if there’s any accumulation at all.

This will be my last regular Monday post at A Weather Moment. I have enjoyed writing my weekly forecast here, but new opportunities mean it’s time for me to give up my regular role. Thanks those that have ready my articles here every week for the past 5 years. I’ll still be a part of AWM, but in a lesser capacity. When the next storm rolls in, you’ll still be sure to hear from me!

Environment Canada has released a summary with snowfall totals associated with the Christmas Blizzard of 2016:

A much-needed break from the past week of frigid arctic air has finally arrived. As you read this post, much warmer Pacific air is flooding across southern Manitoba and should be felt in the Red River Valley by early- to mid-morning.

Today’s weather will feel downright mild compared to the frigid conditions we’ve been experiencing for the past week. Temperatures will climb well into the minus single digits across southern Manitoba, with most locations having high temperatures just a few degrees below freezing. Some spots downwind of the Manitoba escarpment (e.g. Morden and McCreary) may get near or just above the freezing mark. Unfortunately, this warm-up will come at a bit of a cost, with snow likely today and tonight. The initial warm frontal passage this morning may be accompanied by a bit of light snow, with accumulations of 2 cm of less expected. As the parent low pressure system slides southeastward tonight, more snow is possible. An additional 2 cm could fall by Tuesday morning. This will seem like a “dusting” compared to the blizzard earlier this month, but could still be enough to cause traffic problems on untreated roads. Fortunately, it will be warm enough for road salt to melt most of the snow, significantly improving what could otherwise be a fairly icy commute. Winds will be southwesterly at 20-30 km/h today.

Tuesday will see mild conditions persist as the westerly Pacific flow remains over southern Manitoba. Clearing skies are expected throughout the day as today’s low pressure system moves off to the east. Highs will be similar to today’s, with values just below freezing in most areas. Winds will be westerly at 20-30 km/h.

Unfortunately, more snow is possible on Wednesday as another system passes through the region. There is still a lot of uncertainty regarding the track of this system, so it’s too early to pin down exactly how much snow should be expected and where it will fall. Models currently show the system tracking through southern Manitoba, with the heaviest snow almost right along its track. Areas under the heaviest band could see up to 10 cm, while surrounding areas will receive much lesser amounts. Winds will be easterly ahead of the system at 20 km/h, shifting to northerly at 30 km/h gusting to 50 km/h behind the system later in the day.

It appears that mild conditions will persist for the remainder of the work-week before another cool-down arrives. Long range model suggest that another surge of arctic air may come down on or just before Christmas. It’s still too early to tell how long this next arctic blast will last, but unfortunately it’s looking like a pretty cold Christmas Day is on tap.

The arctic air mass that overtook southern Manitoba late last week isn’t going anywhere fast. Very cold conditions are expected to stick around for at least the rest of this week.

Very cold temperatures are expected again today as this frigid arctic air mass remains firmly over southern Manitoba. The benefit of this chilly air mass is that we’ll see a lot more sunshine this week than last, with mainly sunny skies expected today. Generally sunny skies are expected today, although there could be a few light flurries early in the day as a cold front passes through. Unfortunately, high temperatures will struggle to even reach the -20C mark as a renewed push of arctic air surges in behind that cold front. This frontal passage will change our weather pattern slightly, removing the surface ridge that had brought cold, but calm conditions over the weekend. That calm pattern will be replaced with a much windier one, which will make the wind chill a much more important consideration. Westerly winds at 30 km/h will develop today, meaning wind chill won’t rise much above -35, with values approaching -40 late tonight

Tuesday will see slightly warmer temperatures, with highs near -20C, although you probably won’t feel much difference. However, skies will remain mainly sunny, so at least we get that consolation for the very cold conditions. Winds will remain gusty from the west at 30 km/h gusting to 50 km/h, keeping wind chill values in the -32 to -34 range in the afternoon. Wind chill values will drop off a bit on Tuesday night, into the upper minus thirties.

Extreme cold will remain for Wednesday, but the sunshine should as well. High temperatures on Wednesday are expected to climb up near -23C in most areas, but winds will remain unpleasant at 40 km/h gusting to 60 km/h from the west. This will keep daytime wind chill values in the upper minus thirties, with values dropping into the minus forties overnight.

Long range models keep us in this arctic air mass for at least the rest of this week. Some models have hinted at a surge of Pacific air pushing across the Prairies early next week, which would cause a dramatic rise in temperatures back near the freezing mark. However, it remains to be seen if such a Pacific flow will develop, and if it does, how long it might last. For now, you might want to assume that this arctic air mass is going to hang around for awhile, rather than pinning your hopes on the notoriously unreliable long-range forecast.

Environment Canada has issued a Winter Storm Warning for this system.

A major winter storm is moving in as you read this article. It will bring the first serious snowfall of the year to the Red River Valley, with heavy blowing snow or even blizzard conditions possible in many areas. You may want to reconsider any travel plans early this week!

A strong low pressure system will move off the Rocky Mountains and into North Dakota today. It will spread moderate to heavy snowfall into parts of western Manitoba this morning, before snow spreads over the rest of southern Manitoba later in the day. Snowfall will fall for the entire day in most of western Manitoba, with total accumulations of 10-15 cm expected in most areas. Further east, the Red River Valley will see lesser amounts today, with 2-5 cm in the Winnipeg area and more like 5-10 cm near the International border. Local amounts of 15 cm may occur along the International border in south-central Manitoba. Winds will be gusty from the east at 20-30 km/h, producing some blowing and drifting snow.

Conditions will really begin to deteriorate early Tuesday as winds shift to the northwest. Snow will continue to fall as well, with an additional 10-20 cm possible in the Red River Valley on Tuesday. Snow will taper off in southwestern Manitoba, but another 2-5 cm will be possible. The northwesterly winds that develop will be strong at 40 km/h gusting to 60 km/h, with higher values of 50 km/h gusting to 70 km/h in some treeless areas. This will likely result in blizzard conditions over large parts of southern Manitoba, especially south and west of Winnipeg. Those areas that don’t quite meet blizzard criteria will certainly see heavy blowing and drifting snow, with travel becoming difficult or impossible in some areas. Road closures are likely, especially the Trans-Canada Highway west of Winnipeg and Highway 75 south of Winnipeg. Conditions will not improve significantly until early Wednesday.

Snow should finally taper off on Wednesday morning in all of southern Manitoba, but not until most areas have received significant accumulations of snow. Southwestern Manitoba can expect 15-25 cm, while Winnipeg can expect 10-20 cm. Areas along the International border in south-central Manitoba can expect to receive 20-30 cm. Locally higher amounts may occur where heavier bands of snow persist for a longer period of time. Large snow drifts will be a problem on Wednesday, even once the snow ends. Some rural roads may be impassable due to heavy drifting. Blowing snow will persist on Wednesday, but winds will slowly decrease throughout the day. Temperatures will have dropped noticeably on Wednesday as this system begins to pull down a cold arctic air mass.

Conditions will finally calm down on Thursday as winds taper off. However, in the wake of this strong low we’ll see a blast of arctic air, with temperatures likely dropping into the minus twenties on Thursday and Friday. This frigid pattern is expected to persist for awhile, so make sure to get out those winter clothes!