Temperatures will soar in Winnipeg over the coming days as an early-season blast of summer heat moves through.

Thursday will bring mixed skies to the city with continued southerly winds near 30 gusting 50 km/h. Temperatures will continue to be seasonably mild with ah high near 26°C. Late in the day, more cloud cover will move into the region bringing with it a slight chance of showers. Temperatures will head to a low near 16°C with mostly cloudy skies.

Slightly unsettled conditions will continue over the region on Friday. Skies will stay on the cloudier side as temperatures climb to a high in the mid-20’s. Friday will bring the first organized thunderstorm risk to the Red River Valley, although it may end up staying to the west near the escarpment and into the southwestern corner of the province. The city will likely see a chance of showers or thunderstorms through the day, though. Those unsettled conditions may end up persisting through Friday night as well. Temperature should dip to a low near 14°C.

We’ll end up taking a closer look at Friday’s thunderstorm potential in our next forecast post!

Saturday should bring another day of warm temperatures, then a push of cooler air will move in for Sunday. The latter half of the weekend will see highs head back to the teens with a good chance of rain. Things rebound nicely for Monday and Tuesday, then more unsettled weather is possible mid-week.

Today’s seasonal daytime high in Winnipeg is 21°C while the seasonal overnight low is 6°C.

Winnipeg will see variable cloudiness over the coming days as a milder Pacific air mass brings above-seasonal temperatures back to the region.

Seasonal temperatures will give way to Pacific warmth this weekend as it spreads eastwards across the southern Prairies. The city will see a high near -9°C today with southerly winds picking up to around 20 km/h later this afternoon. Skies will stay mixed through the day. Some clearing will push into the region tonight with brisk 30 km/h winds. Temperatures will head to a low near -12°C.

Saturday will bring partly cloudy skies to the region as temperatures climb to a high near 0°C. Winds will start the day near 20 km/h and ease for the afternoon. Winnipeg will see variable cloudiness on Saturday night with temperatures dipping to a low near -7°C.

A low pressure system will push into the Interlake on Sunday, bringing more warmth to the region with mixed skies. Winds will pick up out of the south to around 20 km/h and send temperatures in Winnipeg to a high near 0°C. Winds will shift to the west later in the day with a bit more cloud pushing in for Sunday night. Temperatures should dip to a low near -10°C.

Beautiful December weather will continue right through next week with mild highs in the -5 to 10°C and mixed to cloudy skies. No significant snow is in the forecast.

Today’s seasonal daytime high in Winnipeg is -11°C while the seasonal overnight low is -21°C. 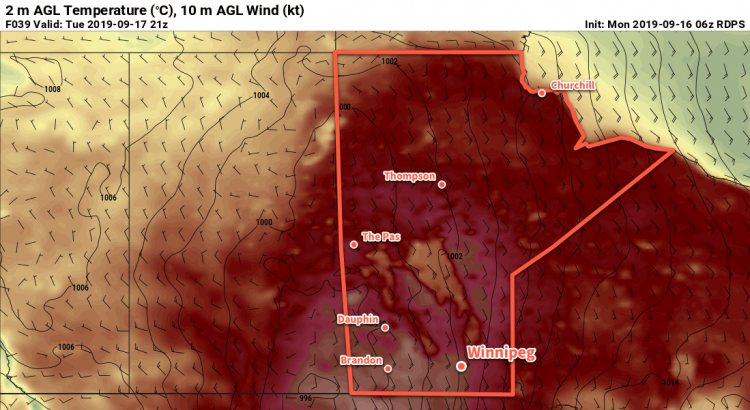 Summer returns to Winnipeg as hot and humid conditions move in to start the week.

Winnipeg will see hot and humid weather today with plenty of sunshine. The city will see a high near 29°C today with notable humidity developing for the afternoon. Dew point temperatures will rise to 19 to 20°C by the end of the day, making it feel quite muggy out. Winds will be relatively light today out of the southeast at 20 km/h.

Humid conditions will continue tonight, keeping temperatures warm. The city will see a low of just 20°C with a few clouds moving in.

The hot and humid weather continues on Tuesday with a high near 30°C and partly cloudy skies. Winds will be stronger, increasing out of the south to around 30 gusting 50 km/h by the end of the day. Temperatures will head to a low near 20°C again on Tuesday night under mixed skies.

The heat will finally break on Wednesday as a low pressure system moves through the region. As it moves through, it will bring mixed to cloudy skies with a chance of showers or thunderstorms. Winds will shift westerly in the morning and increase to around 30 gusting 50 km/h. The humidity will stay for much of the day with dew points remaining in the upper teens. A cold front will push through on Wednesday evening, bringing northwesterly winds to the region that will push the humidity out. Temperatures will dip to a low near 12°C.

The warm nights ahead won’t just be seasonably mild, they may end up being record breakers. New record warm minimum temperatures may be set for September 17 and 18th. If temperatures stay above 20°C on both days, it will easily beat the current records of 17.8°C (1946) and 15.6°C (1964) respectively.

The second half of the week will continue to be seasonably warm with daytime highs in the mid-twenties. Humidity will return to the region on Friday ahead of a major low pressure system. Showers and thunderstorms will spread across southern Saskatchewan into Manitoba on Friday. Unsettled weather will move through the region on Saturday, followed by calmer conditions and seasonal temperatures on Sunday.

Today’s seasonal daytime high in Winnipeg is 18°C while the seasonal overnight low is 6°C.

An approaching low pressure system will bring hot and hazy weather to Winnipeg before a cold front passing Saturday brings a risk of thunderstorms and ushers cooler conditions back into the region.

Winnipeg will continue to see hazy skies today as the over 500 fires that have led to a state of emergency in British Columbia continue to send plumes of some eastwards into the Prairies. The thickest smoke has left the region and winds aloft should keep the main smoke track further north across the central and northern Prairies. Plenty of haze and stagnant high-level smoke will remain in the area with some limited visibility restrictions.1 The significant thinning of the smoke will let the sun shine much more strongly and send daytime highs in the region up into the low 30s. Winds will be out of the south at just 10 to 15 km/h.

Winds will increase out of the south to around 20 km/h tonight as temperatures dip to a low near 15°C under mixed skies.

Saturday should be a scorcher of a day…assuming the smoke can stay away. If we see the sun, then temperatures will soar to a high near 33°C with winds out of the south-southwest at 30 gusting to 50 km/h. Winnipeg will see partly skies in the morning, then a bit more cloud in the afternoon. Some forecasts show some elevated convection developing on Friday night and spreading across portions of western Manitoba and the Interlake. If that does form, it will likely remain north of Winnipeg but will bring some cloud and chances for showers to portions of the province through the morning hours.

A cold front will push through the Red River Valley late in the afternoon and through Saturday evening, bringing with it the chance for some showers or thunderstorms. At this point, there looks to be minimal chances for severe weather with under 1000 J/kg of MLCAPE forecast and bulk shear values near 20 kt.

The potential pitfall for Saturday’s forecast will be if thicker smoke once again moves into the region. It’s hard to tell at this point whether or not it will. Most guidance suggests it will primarily remain further north, but cold fronts can concentrate smoke ahead of them, so we’ll simply have to wait and see. If thicker smoke ends up returning, temperatures will be cooler and the chances for showers or thunderstorms diminish.

For Saturday night, Winnipeg will see winds diminish and temperatures head to a low near 16°C with a slight chance of showers continuing overnight.

Sunday will bring mostly cloudy skies to the region as an upper trough swings through. A small chance for showers is likely to continue into the morning, followed by clearing skies through the afternoon. Temperatures will be much cooler with a high near 23 or 24°C as northerly winds of 30 gusting 50 km/h move into the region. Temperatures will head to a low near 12°C on Sunday night under clear skies.

Southern Manitoba will be under a northwesterly flow through the first half of next week which should bring clearer skies and near-seasonal temperatures. An upper-level ridge will push eastwards mid-week, bringing warmer weather back to the region alongside the potential for more smoke.