Winnipeg will see several rounds of thunderstorms over the next 36 hours, some of which may be severe.

A sharp long-wave trough moving into the region will produce several rounds of thunderstorms over the Red River Valley through the next 36 hours. The initial wave of thunderstorms is pushing through the Red River Valley already. These storms produced a variety of severe weather overnight as they moved through Saskatchewan and southwest Manitoba and will continue to pose a slight chance of producing severe hail or wind gusts.

After those storms move through, Winnipeg should see mixed skies with temperatures increasing to a high near 25°C. Winds will be breezy out of the southeast at 30 gusting 50 km/h.

Another round of thunderstorms will develop later today, likely producing a swath of severe weather extending from the southwest corner of the province right through to Ontario. The storms will begin this afternoon over the southwestern corner of the province and then move through the Red River Valley through the evening. These thunderstorms will be capable of large hail, severe wind gusts, and torrential downpours causing flash flooding.1 It will be a complex and dynamic system this evening, so be sure to stay aware of any watches or warnings issued by ECCC later today.

Saturday morning will likely bring a brief reprieve before an upper low moves into the region. As it moves in, more showers and thunderstorms are forecast to develop. There will be less energy for the storms to utilize, but they may still produce some hail and rather heavy downpours.2 The unsettled conditions will keep things cool with a high near 20°C expected in Winnipeg. Winds will be light to start the day, but pick up out of the northwest late in the day. Temperatures will drop to a low near 12°C with a northwest wind of 20 to 30 km/h and a continued chance of showers on Saturday night.

Conditions will finally settle for Sunday. Skies will gradually clear out with a northwest wind of 20 to 30 km/h. Winnipeg can expect a high near 19°C. A ridge of high pressure will move in on Sunday night, bringing calm winds and a low near 6°C.

Much of next week looks to bring variable cloudiness and warm to seasonal temperatures. By the end of the week, conditions may turn cloudier with a chance of showers.

Today’s seasonal daytime high in Winnipeg is 17°C while the seasonal overnight low is 5°C. 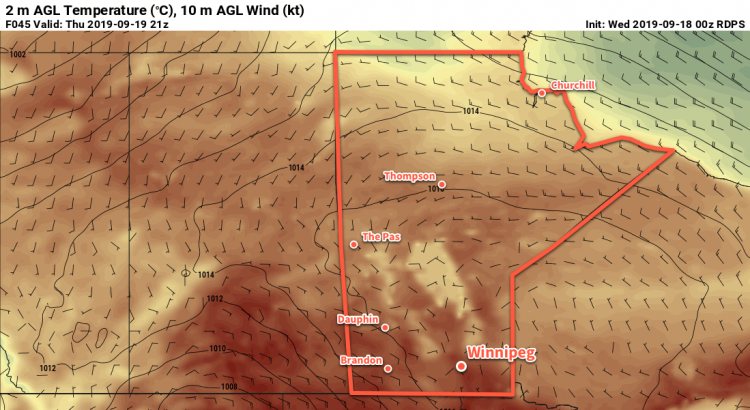 Unsettled conditions will usher in cooler, but still mild, temperatures and less humid conditions for Thursday, but more humidity and rain looks likely on Friday.

The hot and humid weather Winnipeg has seen over the past couple days will come to an end today. A low pressure moving across the province will bring mixed skies to the Red River Valley as it gradually pushes the humid air off to the east. The region will have a chance of seeing some showers or thunderstorms, particularly midday into the afternoon, but most of the activity should keep to the west and north of Winnipeg. Temperatures will be a bit cooler today than the last couple, but still above-seasonal with a high near 24°C.

As the day progresses, winds will pick up out of the west into the 20 to 30 km/h range, then shift northwest in the evening as they taper off. Temperatures will head to a low near 13°C. Despite the cooler low, there’s still a chance that Winnipeg may break its record warm minimum temperature for September 18. The city managed to break yesterday’s warm minimum record – 17.8°C set in 1946 – with a minimum of 21.3°C. If temperatures can stay above 15.8°C until 1 AM, then the city will break the previous record set in 1964.

Thursday will be a pleasant day across the region as a ridge of high pressure moves through. Expect mainly sunny skies, light winds, and a high near 22°C. The next disturbance on the way will spread cloud into the region on Thursday night as temperatures head to a low near 14°C.

Friday will bring the next significant low pressure system to southern Manitoba. The low is forecast to organize over central North Dakota on Friday, then move across the Red River Valley on Friday night. It will spread showers and thunderstorms into southern Manitoba through the day Friday, that will further organize and strengthen into Friday night. This system will be capable of producing heavy rainfall as it taps into that same humid air that was over Winnipeg on Monday and Tuesday.

It’s still a bit early to be specific in the forecast, but in general it looks like much of southern Manitoba will see showers and thunderstorms with 25 to 50 mm of rain by the end of Saturday. The biggest uncertainties will be when the rain begins—some suggest early Friday, other models keep the rain off until late in the day—and how banded in nature the heavy rain is. Either way, wet weather looks to be back on the way for Friday into Saturday.

Other than the rain, Friday will be seasonably warm with a high near 25°C. A southerly wind of 20 to 30 km/h will draw some humidity back north, making it feel a bit humid out and ensuring that it stays on the warmer side while it rains.

Today’s seasonal daytime high in Winnipeg is 17°C while the seasonal overnight low is 6°C. 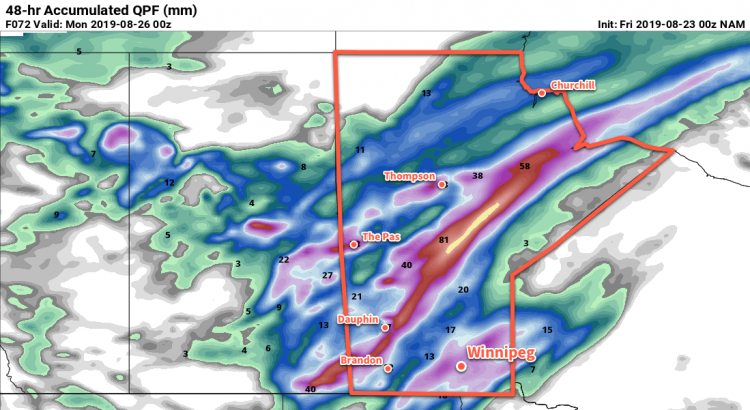 A slow-moving disturbance will bring unsettled conditions to the Red River Valley this weekend.

Winnipeg will see a beautiful end to the work week today as temperatures return to the upper 20s with plenty of sunshine. That warmth will come with breezy conditions as southerly winds strengthen to 30 gusting 50 km/h this morning. The city should see partly cloudy skies for much of the day, but cloud cover will thicken up in the evening.

It will be a warm night tonight with temperatures only dropping to around 19°C under cloudy skies. The southerly winds will continue right through the night.

Showers and/or thunderstorms will develop over western Manitoba overnight and slowly push northeast. This activity will likely stay west and north of Winnipeg, but there’s a chance that passing showers may graze Winnipeg on Saturday morning.

Through the rest of Saturday, the city will see cloudy skies with winds continuing to strengthen to 40 gusting 60 km/h out of the south. Showers and/or thunderstorms are likely through the day to the west and north of the city, but they will slowly push eastwards through the day. Despite the cloud, it will still be fairly warm with a high near 25°C.

The wind will continue through Saturday night in the 30 to 40 km/h range. Skies will stay cloudy through the night with temperatures dropping to a low near 17°C.

Showers will slowly move eastwards into the region overnight with what looks like a good chance of some rain before the sun rises on Sunday. There will be a risk of a thunderstorm with the showers pushing eastwards overnight.

It’s important to note that weekend’s system is moving slowly, and will have the potential of producing very slow-moving lines of thunderstorms as it trudges eastwards. The slow progression of these storms means they will be capable of producing significant rainfall accumulations with a risk of flash flooding. Be sure to stay aware of ECCC’s daily thunderstorm outlook available on our bulletin viewer and for any watches or warnings issued through the weekend.

The unsettled conditions will likely stay for Monday before gradual clearing begins working into the region on Tuesday. As the sun appears next week, so too will a prolonged stretch of seasonably cool weather. Daytime highs are forecast to drop into the mid- to upper teens for much of the next week.

Today’s seasonal daytime high in Winnipeg is 24°C while the seasonal overnight low is 11°C. 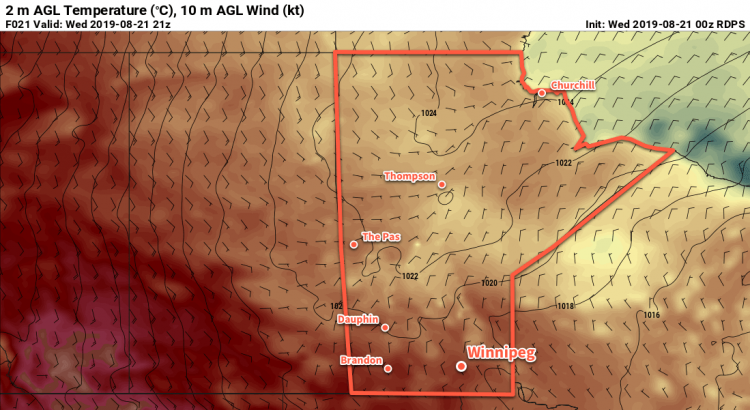 An Arctic ridge will bring chillier, fall-like conditions to Winnipeg over the next few days.

Cooler temperatures will be in place this morning across southern Manitoba as an Arctic ridge continues its trek across the province. The city will see sunshine give way to some afternoon cloudiness today with breezy north-northwest winds near 20 km/h. Temperatures will be cool with a high of just 20°C. The clear skies will continue tonight with a low near 6°C and diminishing winds.

On Thursday, more seasonal temperatures will return to the region as the Arctic ridge moves off into Ontario. Winnipeg should see a high temperatures near 23°C with a southeasterly wind near 20 km/h developing in the afternoon. Skies will stay mainly sunny through the day. The city will see a few clouds overnight as temperatures dip to a low near 12°C.

Cloud cover will push in early on Friday as a large trough of low pressure moves towards the region. It will be a moderately windy day with southerlies into the 30 gusting 50 km/h range developing in the morning. Temperatures will climb into the mid-20s before showers spread into the region in the afternoon. The chance for showers–along with a slight risk of a thunderstorm–will continue right through the night. Winnipeg will see a mild low on Friday night near 17°C.

A rather unsettled weekend is on tap for much of southern Manitoba. The slow-moving upper trough is forecast to produce several rounds of showers and/or thunderstorms over the region Friday night through Tuesday. Temperatures look to hover near seasonal values with southerly winds on Saturday turning northwesterly for the first half of next week.

Today’s seasonal daytime high in Winnipeg is 24°C while the seasonal overnight low is 11°C.