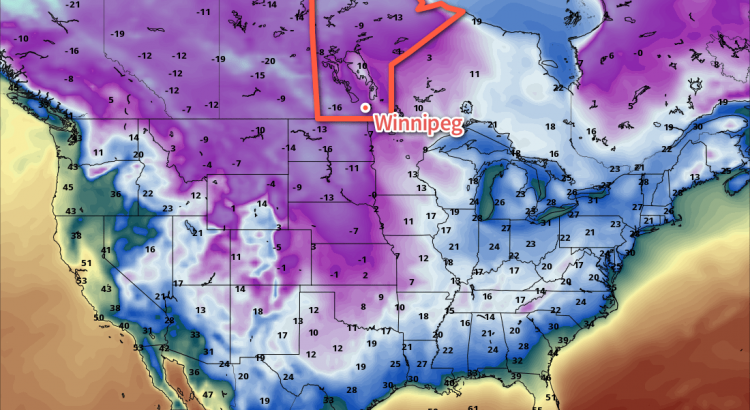 A powerful winter storm brought 20-30cm of snow to much of the Red River Valley yesterday followed by another 4-8cm overnight. This fresh snow combined with powerful northerly winds to produce white-out conditions on area highways. The snowfall accumulations combined with the blowing snow resulted in the closure of many area highways making travel nearly impossible. While conditions will gradually improve, it will be at the cost of the warmth that’s been in place over the region for the past month: the coldest temperatures we’ve seen since February are on the way.

Today will bring flurries to the region as a weak disturbance slides through from the northwest on the backside of the main low pressure system that brought the heavy dump of snow yesterday. The gusty northerly winds will continue with winds out of the north to northwest at 40 gusting 60 km/h. While the snow won’t be nearly as heavy as yesterday, most places can still expect another 2-4 cm of snow.

The one exception to that will be areas in the lee of Lake Manitoba, where a band of lake-effect snow is expected to develop which will move south-southeast off the lake. This will result in a narrow band of snow which could see accumulations potentially reach as high as another 15-20cm, depending on how intense the flurries become.

Snow will taper off this evening, save for lingering snow moving off the lakes. Skies will remain mainly cloudy as temperatures head towards a low near -10°C with winds easing to 30 gusting 50 km/h by Thursday morning.

Thursday will continue with mainly cloudy skies and a chance of flurries, but winds will slowly ease to around 20 km/h. Temperatures will remain steady through the morning, but then drop towards the -14°C mark through the afternoon. Skies will begin to clear through the evening, save for a narrow band of cloud coming off each of Lake Manitoba and Lake Winnipeg. There’s a fairly decent chance that Winnipeg will see some flurries from Lake Manitoba on Thursday night as winds shift to more of a WNW direction. Temperatures will drop to a low near -21°C, but may remain a few degrees warmer underneath the lake-effect cloud cover. Wind chill values will be in the -30 to -35 range overnight.

Much of the cloud cover will break up on Friday with winds dropping off as the Arctic ridge begins moving into the province. While there will be some sun, temperatures will be well below seasonal values with highs near the -17°C mark. Temperatures will dip to a low near -24°C on Friday night.

The cold weather will last through the weekend and into the start of next week; Saturday and Sunday will likely see highs in the -15 to -20°C range with the chance of flurries as a disturbance moves through. Even colder air has the potential of building in for the start of next week, potentially pushing daytime highs below -20°C.

In general for the first half of December, below-normal temperatures are expected as an air mass that had previously been locked over Siberia has shifted across the Arctic and will remain entrenched over the northern sections of North America.