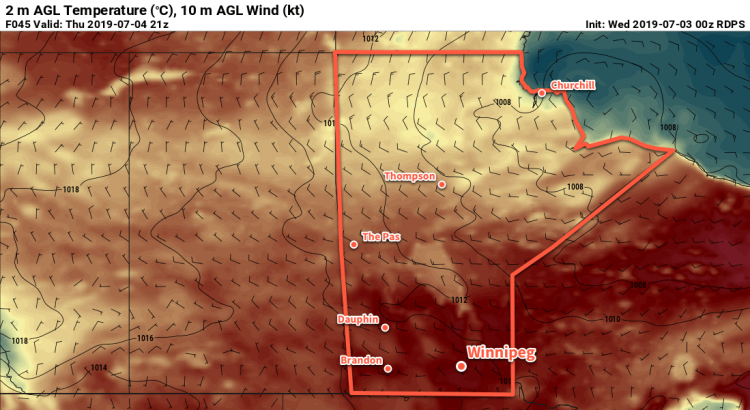 The second half of the work week will bring variable cloudiness with seasonal temperatures to Winnipeg.

Winnipeg will see fairly cloudy conditions today and tonight, a result of a persistent southwesterly upper-level jet over the region. Several disturbances will move through the region, bringing plenty of cloud cover and a few showers. While Winnipeg will see the cloud, any rain – what little may fall – will likely stay south of the city. With the generally cloudy conditions, temperatures should climb to a high near 23°C in the city. The winds should stay light out of the west or southwest. Much of the cloud will stay in place tonight with lows dipping to around 13°C.

Thursday will bring mixed skies as the cloud cover slowly clears out of the region. With more sunshine, temperatures will end up a bit warmer with a high near 25°C. Winds will again be relatively light at 10 to 20 km/h out of the northwest. Skies should clear out on Thursday night with temperatures dropping to a low near 13°C again.

On Friday, a ridge of high pressure will begin building into the province. As it moves in, it will bring mainly sunny skies and a high temperature near 24°C. Winds will pick up out of the north into the 15 to 25 km/h range in the morning. The high will continue building into southern Manitoba on Friday night, bringing clear skies and a seasonably cool low near 9°C.

Heading into the weekend, upper-level ridging will begin developing as a cold low over the northern Prairies shunts off into eastern Canada. This will begin to push daytime highs back into the upper 20s with a developing southerly flow. With mostly sunny conditions expected on Saturday alongside the heat, the weekend looks set to bring some very pleasant summer weather!

On Sunday, things are forecast to become more unsettled as a train of shortwaves eject from an upper trough over the west coast and begin flattening the upper ridge. The first half of next week will likely bring several rounds of thunderstorm activity to the region, possibly every day between Sunday and Wednesday. Nocturnal convection is difficult to pin down at the best of times, so right now there’s no saying whether Winnipeg will see thunderstorms/rain or not. Just keep in mind that the possibility for them will begin to increase Sunday into the start of next week.

Before then, though, enjoy some relatively pleasant summer weather!

Today’s seasonal daytime high in Winnipeg is 25°C while the seasonal overnight low is 13°C.