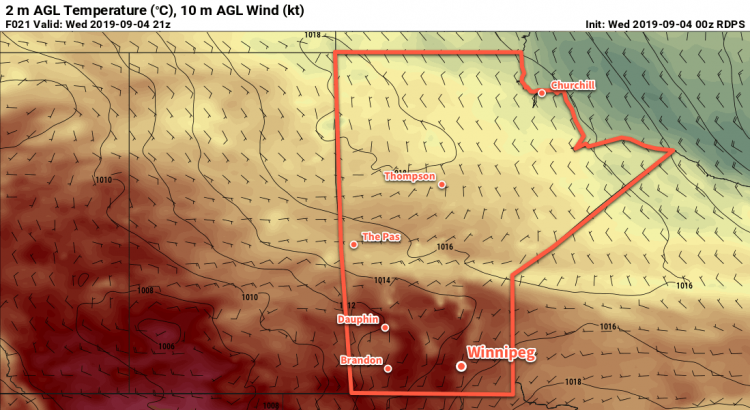 Winnipeg will see variable cloudiness and seasonal temperatures through the remainder of the work week.

Great early September weather is on tap for Winnipeg today as temperatures climb to a high near 23°C with plenty of sunshine. Winds will also be light out of the south at 15 to 20 km/h. The cloud cover will thicken up this evening ahead of a low pressure system arriving from Saskatchewan. Winnipeg shouldn’t see any rain tonight; the precipitation with this system is forecast to split and pass through the southern Interlake and into the United States. A few showers may be possible in the Red River Valley with increasing likeliness towards the U.S. border. Temperatures will dip to a low near 14°C with light winds.

Skies will gradually clear out on Thursday morning, leaving the city with partly cloudy to mixed skies in the afternoon. Winds will stay light out of east-northeast as temperatures climb to a high near 22°C. Winnipeg will see a few clouds through Thursday night as a cold front sweeps across the Red River Valley. This front will likely stay dry as it pushes southeast, but northwesterly winds near 20 km/h will develop. Temperatures will dip to a low near 14°C again.

Winnipeg will see partly cloudy skies again on Friday but those northwest winds will strengthen to around 30 km/h for the afternoon. Temperatures will continue the slight cooling trend with a high near 21°C. Firmly in the cooler air on Friday night, temperatures will be colder with lows dropping into the mid-single digits.

It’ll be a cool weekend ahead with mixed to cloudy skies and highs in the mid- to upper-teens. Conditions look dry with light winds. Kick off next week will be another significant low pressure system that has the potential to bring 10 to 20 mm of rain to the region on Monday into Monday night.

Today’s seasonal daytime high in Winnipeg is 21°C while the seasonal overnight low is 8°C.