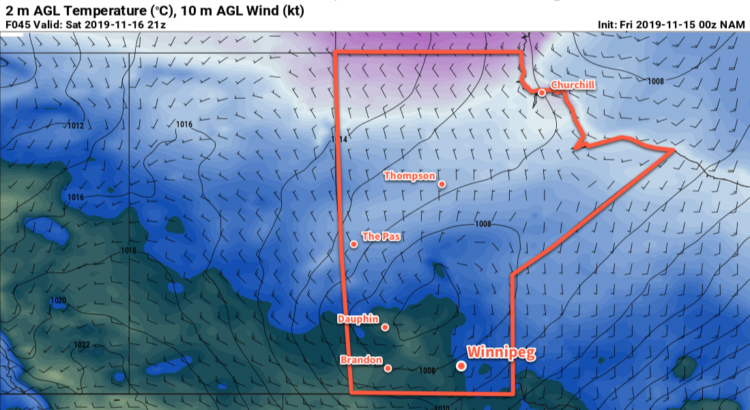 After a seasonably cool Friday, milder temperatures and cloud cover will move into southern Manitoba for the weekend.

Another Arctic high moving through the province will bring cooler temperatures back to Winnipeg today. Temperatures will climb to a high near -5°C today with light winds gradually increasing out of the southeast to around 30 km/h by the evening. The city will see a mix of sun and cloud today, but a warm front moving into the region will spread overcast skies into the region this evening. The southerly winds will continue tonight with temperatures rising to around -2°C by Saturday morning.

Skies will stay mostly cloudy right through the weekend as a series of low pressure systems works their way across the Prairies. Saturday will bring seasonably mild conditions to the Red River Valley with a high near +2°C in Winnipeg. Winds will taper off on Saturday afternoon, then pick up out of the northwest to around 30 km/h overnight as a weak cold front pushes through. There will be a chance for a few flurries as the front moves through, but no more than a centimetre or two should accumulate. Temperatures will dip to a low near -6°C on Saturday night.

Winds will ease on Sunday with mostly cloudy skies and a slightly cooler [seasonal] high near -2°C. Skies will stay cloudy on Sunday night as another low pushes across the northern Prairies; mild temperatures will persist with a low near -4°C in Winnipeg.

Winnipeg could see a bit of rain or snow on Monday with temperatures likely climbing back above 0°C again. It looks like a cloudy first half of the week is in store for Winnipeg as mild temperatures near freezing sticking around until the later half of the week. Some snow looks possible mid-week as a cold front swings through on Wednesday.

The sun should reappear in the second half of the week as Winnipeg moves into a stretch of near-seasonal temperatures.

Today’s seasonal daytime high in Winnipeg is -2°C while the seasonal overnight low is -9°C.