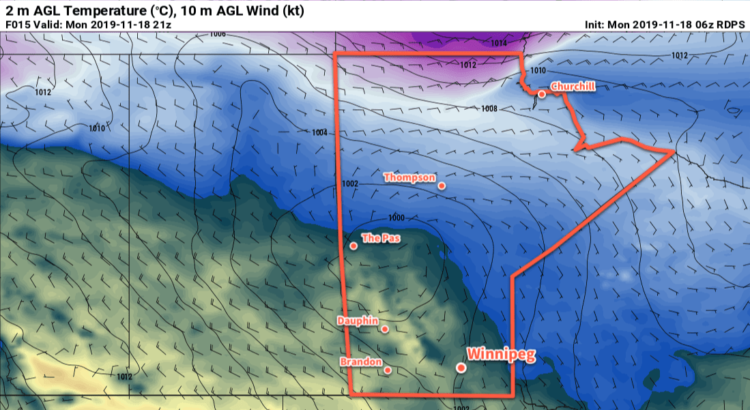 Mild weather continues in Winnipeg with only a brief cool-down in the latter half of the week.

A series of low pressure systems passing through the Prairies will maintain seasonably mild temperatures to start the new work week. Winnipeg will see a mild start to the day with temperatures near freezing climb to a high of +3°C this afternoon. Moderate southerly winds near 30 km/h will ease through the morning, followed by light winds for the afternoon as a trough moves into the Red River Valley. Skies will be mainly cloudy but a few sunny breaks are possible, particularly midday into the early afternoon. The cloud cover will thicken up later in the day with a chance of rain showers through the evening hours.

Skies will stay cloudy overnight with light westerly winds. Winnipeg should see a low near 0°C.

Tuesday will bring cloudy skies to the city with light west-northwest winds as a low spins its way into northeastern Manitoba. There won’t be much going on weather-wise; Winnipeg will see a high near +2°C and cloud. A cold front will push into the region on Tuesday night, keeping skies cloudy and bringing a chance of flurries to the region overnight. Winnipeg will see a low near -4°C.

Cooler air will continue streaming southwards on Wednesday, bringing with it cloudy skies with the chance of flurries. Winds will persist out of the northwest at 20 to 30 km/h while temperatures hover around -4°C. The cloud cover will begin to break up overnight as temperatures head to a low near -10°C.

A cooler air mass will be in place over the region on Wednesday, bringing high temperatures in -5 to -10°C range. Fortunately, the cool-down will be short-lived with highs back near the freezing mark returning on Friday and persisting through the weekend.

A longer stretch of mild temperatures near the freezing mark should persist through the middle of next week with variable cloudiness and no notable rain or snow events. Time to enjoy a pleasant stretch of weather heading into the end of November!

Today’s seasonal daytime high in Winnipeg is -3°C while the seasonal overnight low is -10°C.