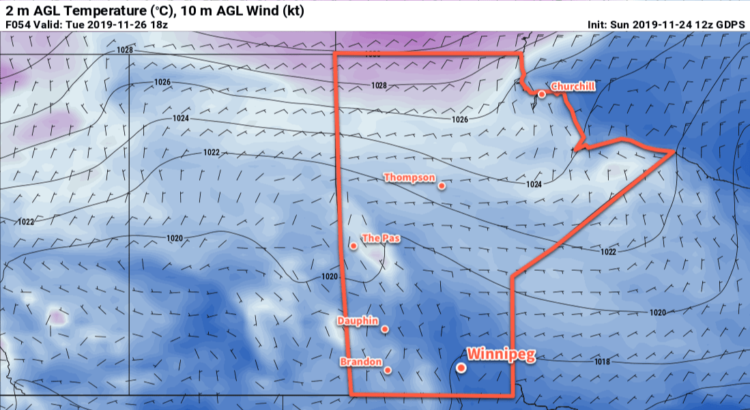 Winnipeg will see plenty of cloud through the first half of the week as temperatures gradually return to seasonal values.

Winnipeg will see cooler weather move into the region over the next few days, pushing south behind the disturbance exiting the region this morning. An upper low over the central Prairies will block any potential for an Arctic blast, though. Instead, there will be plenty of cloud cover with occasional flurries as temperatures slide to seasonal values.

Today, Winnipeg will see the snow taper off with a few flurries lingering. Temperatures will over around 0 or -1°C through most of the day with winds picking up out of the north to 30 gusting 50 km/h. The wind will taper off this evening as the city heads to a low near -6°C under mostly cloudy skies. There will be a chance of flurries through the night.

The city will see plenty of cloud on Tuesday, but a few sunny breaks are possible. Temperatures will climb to a high around -3°C and winds will be light. With the upper low in the vicinity, the city will continue to see a chance for a few flurries. Winds will pick up light out of the northeast on Tuesday night as Winnipeg heads to a low near -7°C. Skies will stay cloudy with…a chance of flurries.

Skies will again stay mainly cloudy on Wednesday with what looks like a good chance for some flurries. The high should be around the -5°C mark with a light northerly wind. Mostly cloudy conditions will continue Wednesday night with a low near -10°C.

Unfortunately, the sun doesn’t look like it will make much of an appearance through the second half of the week, either. Another disturbance is forecast to move through on Thursday night, likely bringing another 2 to 5 cm of snow to Winnipeg and area. Temperatures will continue to hover around seasonal values into the weekend.

The sun is forecast to make a reappearance heading into Saturday and Sunday, but cooler conditions will push in to start next week, sending daytime highs below the -10°C make.

Today’s seasonal daytime high in Winnipeg is -5°C while the seasonal overnight low is -13°C.