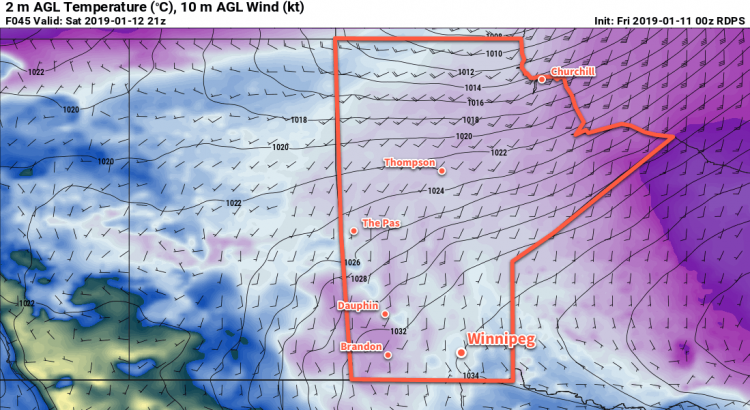 Winnipeg will continue to see mild temperatures right through the weekend with variable cloudiness.

Mild weather will continue in Winnipeg today despite a weak cold front slumping southwards through the province. Temperatures will reach a high near -8°C today with light northerly winds of 15 to 25 km/h. Skies will remain cloudy through the day with just a slight chance of flurries.1 Temperatures will dip to a low near -14°C with the cloud cover breaking up a bit overnight.

On Saturday, a ridge of high pressure will move across southern Manitoba, bringing mixed skies and light winds. Temperatures will remain seasonably warm with a high near -8°C and winds will be light. Temperatures will dip to a low near -12°C as cloud cover increases as a warm front pushes through the region.

Sunday will bring cloudy skies to the region with temperatures in Winnipeg reaching a high near -6°C. Southerly winds near 20 km/h in place through the morning will diminish for the afternoon. Temperatures will remain mild through the night with a low near -11°C.

Next week will begin warm, however forecasts suggest than a powerful cold front will push through mid-week. Its passage would usher in an outbreak of Arctic air, sending temperatures back down to typical “January in Winterpeg” values. Some weather models suggest that daytime highs will fall into the -20s by the end of the week. Forecasts show no snowfall over the next week.