Winnipeg will see temperatures climbing back towards the mid-30s this week as another heat wave is set to develop over the region.

Winnipeg will move into another extended period of hot, dry weather over the coming days. An upper ridge will gradually amplify over the rest of the week, producing another broad area of clear skies with increasingly hot weather.

Before the warmer weather starts, the city will see one more “cool” day. Skies will be a bit cloudier this morning with a few showers or thunderstorms drifting into the Red River Valley. Most of this activity will pass to the south of Winnipeg, but there is a chance for the city to see a shower or thunderstorm in the first half of the day. Skies will clear for the afternoon with temperatures climbing to a high near 29 °C. Skies will stay mainly clear tonight with a low near 15 °C.

The rest of the week will bring warming temperatures and mainly clear skies. As the upper ridge amplifies, daytime highs will climb to 35 °C by Friday. Overnight lows will warm to around 20 °C. Winds will be light on Thursday, but southerlies will pick up to around 20 km/h on Friday.

Hazy skies will linger through the region this week.

Temperatures will stay in the mid- to upper-30s through the weekend and right through next week. While there may be the periodic chance of showers or thunderstorms, little to no organized rainfall potential is in the forecast.

The hot, dry conditions will continue to worsen the drought over the region and push more regions into an extreme fire danger. While smoke plumes can be difficult to forecast beyond short time ranges, it’s highly likely that southern Manitoba will continue to see varying amounts of smoke moving through the region.

Drink lots of water, check on those who may not be able to protect themselves from the heat as well, and stay safe!

Today’s seasonal daytime high in Winnipeg is 26 °C while the seasonal overnight low is 13 °C.

Winnipeg will see very hot and unsettled conditions heading through the weekend.

A low pressure system crossing the province today will send temperatures soaring in Winnipeg. South-southwest winds of 30–40 km/h will usher in a hot air mass with highs climbing into the mid- to upper-30s. The dew point will stay in the low teens which will mean, fortunately, that the humidity won’t make the heat feel any worse than it already is. A “cold” front will sweep southwards through the Red River Valley later today. This front will bring a risk of thunderstorms to the region as it passes, although the most likely area to see any convection will be south near the U.S. border. Winds will shift to the north behind the front and then ease overnight. Temperatures will head to a low near 18 °C.

On Saturday, moderate southerly winds will bring more hot weather back into the region as another low pressure system moves into the province. Temperatures will climb back into the mid-30s but this time humidity will accompany it. Dew points will climb into the mid- to upper teens, making it feel closer to +40 out. That heat and humidity will meet another cold front pushing into the Red River Valley late in the day. This combination will bring a risk of thunderstorms — potentially severe — to the region Saturday evening and overnight. Temperatures will head to a low near 19 °C.

Drier, slightly cooler air will work into the region on Sunday. The morning will start with some lingering cloud with a chance of showers or thunderstorms as the cold front slowly continues to push through the valley. It should be off to the east by late in the morning with skies clearing for the afternoon. Temperatures will climb to a high near 27 °C with a moderate westerly wind bringing more comfortable humidity levels to the region. Skies will stay clear on Sunday night with a low near 14 °C.

Next week will start with mainly sunny skies and highs near 30 °C again. Forecasts show more unsettled conditions developing mid-week, then gradual cooling back towards seasonal values by the weekend.

Today’s seasonal daytime high in Winnipeg is 22 °C while the seasonal overnight low is 9 °C. 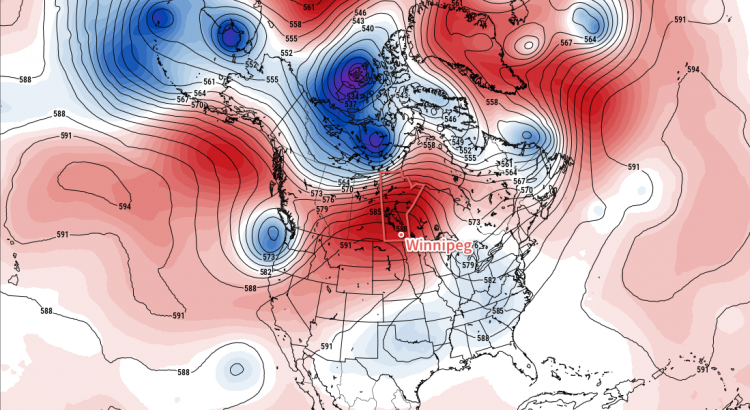 Winnipeg will [likely] see record-breaking temperatures over the coming 3 days as a heat wave develops over the province.

Winnipeg will be scorching under the influence of a potent upper-level ridge this weekend. This potentially record-breaking warmth will pose a danger to those who have sensitivities to the heat, especially as overnight lows warm up in the low 20s. With little relief from the heat, it will be important to remain hydrated limit outdoor activities as much as possible late in the morning through the afternoon when the sun is at its highest.

So, how hot will it be? Today will be the initial day of significant heat in the region with temperatures increasing to a high near 35°C under sunny skies. Winds will increase to 15-20 km/h this afternoon. Temperatures will remain mild tonight with a low near 19°C.

Saturday will see even more heat build into the region as winds pick up out of the south to around 30 km/h. Temperatures will climb to a high near 36°C under sunny skies. Saturday night will see a very warm low near 23°C. Sunday appears to be even warmer than Saturday with southerly winds of 20 to 30 km/h continuing. Winnipeg should see a high near 37°C. A passing low pressure system on Sunday night will allow slightly cooler air to begin building back into the region. This should allow temperatures to dip to near the 20°C mark on Sunday night.

Fortunately, humidity levels will remain fairly average throughout this event. Strong evapotranspiration may lead to slightly humid conditions in the mornings, but as it quickly warms up the moisture should mix out of the boundary layer and return to more average values. Make no mistakes, though, it’s still going to be extremely hot.

This heat wave will spread significant heat that could potentially break records every day over the coming three days.

Today will be a close one with daytime highs and overnight lows forecast near the existing records. Both Saturday and Sunday, however, show a strong likelihood of breaking both daytime maximum temperature records as well as record warm overnight lows. These records are derived from ECCC’s official observation database for Winnipeg and are inclusive from 1873-2017.

As mentioned before, a low pressure system with a cold front will move through the region on Sunday night. It looks like the passage of the front will remain dry, but it should bring a return to near to slightly below-seasonal temperatures. Another warm-up into the upper 20s or low 30s is possible in the latter half of next week.

The heat wave across Southern Manitoba will continue through today and tomorrow as even more warmth and humidity build into the region. Significantly cooler air will move into the area on Sunday, behind a cold front passage on Saturday that will bring another round of potentially severe weather to the province.

Today will be a hot day with increasing humidity as a deep southerly flow develops ahead of a deepening low pressure system ejecting northeastwards out of Montana. Temperatures will climb into the low 30’s with high temperatures reaching around 32 or 33°C this afternoon. Winds will also pick up out of the south to around 40km/h with gustiness on top of that. The humidity will be less than some days of late, but still fairly moderate with dew point values in the 18–20°C range. This will make it feel more like more like 37–40.

Some afternoon clouds will be about associated with the low pressure system lifting NE out of Montana. No precipitation is expected, though.[1] We’ll have a very mild low temperature tonight of 21 or 22°C.

Saturday’s weather story will be dominated by a cold front pushing eastwards across the Red River Valley. The southerly winds combined with pooling ahead of the cold front will make for very humid conditions with dew point values climbing to 23–24°C. With a high temperature near 33°C, it will feel more like the low 40’s and make for very uncomfortable conditions. As the cold front pushes eastwards, showers and/or thunderstorms are quite likely.

There are two possible outcomes for Saturday’s setup:

At this point, it appears as if option 2 is the more plausible one. As always, looking at the MIST principles of thunderstorm development:

Everything appears to be on track regarding today’s severe weather potential. There is a moderate risk of severe thunderstorms through much of the Red River Valley, Interlake and areas eastwards to the Ontario border. This includes large swaths of popular beaches & cottage country.

For the most part, all the expected conditions continue to pan out. Some elevated convection has developed overnight, however it doesn’t look like it will inhibit surface heating through the Red River Valley very much today. Very warm daytime highs in the low 30’s combined with dewpoint values in the 22-24°C range will combine to produce MLCAPE values of 2000-2500 J/kg and SBCAPE values exceeding 3000 J/kg. Combined with over 30 kt of 0-6km bulk shear and looping hodographs, there is sufficient energetics, dynamics and shear vectors to support strong supercell thunderstorms. Throughout the entire slight risk region, there will be a risk for large hail, strong winds and torrential downpours. Further north, in the moderate risk area, surface winds will be backed slightly more as the surface low pressure system continues moving northeastwards. Additionally, areas slightly further north will be closer to the upper-level jet and see enhanced 0-6km shear values. As such, any thunderstorms that develop in this region will pose a tornado threat, with the possibility of the production of a significant tornado today.

A strong cap in place will keep surface-based convection from triggering until late in the day as a trough pushes eastwards into the Red River Valley. Discrete supercell thunderstorms will likely develop between 4 and 6PM and then push east-northeastwards. As the line of thunderstorms pushes eastwards, upscale growth is likely as the system evolves into an MCS capable of all modes of severe weather.

Today could end up one of the most significant thunderstorm days of the year in Southern Manitoba. Stay aware of any watches and warnings issued by Environment Canada through the day today.

Sunday will bring partly cloudy skies on the back-side of the low as it departs Manitoba. Significantly cooler weather will be in place with daytime highs of just 23°C expected. There may be a slight chance of some light, isolated showers, but the threat looks minimal at this point. Temperatures will dip to around 12°C on Sunday night.

Taking a quick peek at next week, it appears that the cool down will be short-lived as significantly warmer air begins pushing back into the region mid-week. Alongside the warmer temperatures will come the potential for more unsettled, stormy weather.