November 2017’s mild end continued throughout the first two-thirds of December with daily mean temperatures as much as 13.8°C above normal. Things abruptly changed for the last third of the month, though, with daily mean temperatures plummeting to nearly 10°C below normal as daytime highs near 0°C were replaced by highs in lower minus 20’s and overnight lows as low as -35.5°C.

Although no records were set throughout December – the warmest weather was nowhere near warm enough and the cold weather couldn’t compare to the deep freeze of the late 1800s – the month was marked by gradually increasing warmth followed by an abrupt shift into significantly colder conditions just in time for Christmas. The high of -26.4°C on December 25th marked the 8th coldest high for Christmas Day in Winnipeg’s record. New Year’s Eve was also

December had a monthly mean temperature of -14.8°C, which was 0.4°C below the seasonal normal of -14.4°C. The mean daily high temperature was -10.4°C, which was 0.7°C colder than normal. The mean daily low temperature was -19.2°C, just 0.1°C below normal. Warmer than normal daytime highs occurred on 17 of 31 days and warmer than normal overnight lows occurred on 17 of 31 days as well. 18 of 31 days saw warmer than normal daily mean temperatures, which just goes to show the relative intensity of the cold weather at the end of the month; despite only being in place for less than half the month, it was cold enough to bring the overall temperatures below seasonal averages. And despite Christmas ranking in the top 10 coldest, the month overall was unremarkable in the climatological standings: it ended as the 81st warmest December on record.1

December 2017 brought Winnipeg’s rather dry 2017 to a close with more of the same. The airport climate observing site saw a paltry 7.5 mm of precipitation through the month, well below the climatological average of 20.6 mm.

These three events combined to produce 73% of the month’s precipitation. The remainder was through numerous light to trace snowfall events. These events weren’t uncommon; there were another 9 days in December with measurable precipitation at the airport.

We’ll have more about the overall annual precipitation statistics in our 2017 climatological summary.

The urban heat island is a well documented weather phenomena, but we think it’s interesting to begin building a record of quantifying the variability of conditions between the middle of the city and the airport, both for interest’s sake as well as to better identify the difference in temperatures one may experience if they live closer to the core of the city versus nearer the perimeter.

As a general rule, we expect warmer conditions at the Forks, particularly at night, and no systematic difference in precipitation. The Forks is not considered the official climate record location for Winnipeg, so it will not be used for climatological rankings or comparisons.

Note: Due to technical problems, data for The Forks is unavailable for December 27th and 28th.

The most noticeable temperature difference at The Forks occurred on December 19th where the Forks’ minimum temperature of -15.9°C was 6.8°C warmer than the airport’s -22.7°C.

The Forks ended the month with 0.9 mm more precipitation than the airport at 8.4 mm with all events within 1 mm of each other. This is still less than the Charleswood amounts by 2.8 mm, showing the shortcomings in utilizing automated systems to measure snowfall.

In the end, December was generally pleasant but had a bitterly cold finish. There were no major snowfall events and precipitation continued to be well below normal, rounding out a very dry year in Winnipeg.

November 2017 got off to an early cold snap as a storm passing through on the 4th brought around 10 cm of snow to Winnipeg and then plunged the city into record cold by the 9th. Winnipeg would then spend the rest of the month trending towards a milder pattern, but the early month cold snap wasn’t to be overcome and Winnipeg ended the month with a below-seasonal monthly mean temperature.

Perhaps most notably, though, is the stark contrast from November 2016 which saw every single day of the month bring above-seasonal temperatures and ended up as the warmest November on record.

Precipitation was significantly lower than normal through much of November; 58% of the monthly precipitation occurred on November 4th when the airport received near 10 cm of snow that melted down to 5.3 mm of liquid.

The story was slightly different at the Charleswood measuring site maintained by Rob’s Obs. The site saw a total of 21.3 cm of snow[2] and a total of 14.3 mm of liquid precipitation.[3] The Charleswood site had 43% more precipitation than the airport, but still fell well below normal with just 57% of the 1981-2010 monthly average.

One feature I’d like to add to these monthly overviews is a comparison with the official Environment Canada site at The Forks. The urban heat island is a well documented weather phenomena, but I thought it would be interesting to begin building a climatology of exactly how different conditions are in the middle of the city, both for interest’s sake as well as to better quantify the difference in temperatures one may experience if they live closer to the core of the city versus nearer the perimeter.

As a general rule, we expect warmer conditions at the Forks and no systematic difference in precipitation. The Forks is not considered the official climate record location for Winnipeg, so it will not be used for climatological rankings or comparisons.

The Forks ended the month with 0.2 mm more precipitation than the airport through a mix of events that brought more or less in comparison. The biggest difference was the major snowfall on November 4th in which The Forks received 8.5 mm compared to the airport’s 5.3 mm. This was also higher than the Charleswood observation site’s roughly 6.2mm from the event.

November 2017 ended up a cool, dry month. A milder second half moderated the extreme cold that followed the single major snowfall event of the month on November 4th, but overall monthly temperatures still ended up below the seasonal average. Precipitation was well below normal at both the Airport and Charleswood observation sites, continuing the trend of a rather dry year in Winnipeg.

September brought mild weather to Winnipeg with above normal temperatures on about two-thirds of the days in the month. The month also started off extremely dry, but a change to a more unsettled pattern mid-way through the month ended up producing measurable rain on 9 of 13 days, including 25 mm of rain on September 22.

The coldest temperature of the month came on September 29th, where the temperature dipped to a chilly -1.2°C in the morning, 4.6°C below the normal seasonal low of 3.4°C.

September begin with very dry conditions, continuing the trend from August, which saw dramatically lower than normal rainfall. Mid-month, however, a significant shift occurred which brought disturbance after disturbance across southern Manitoba, producing much rainier conditions. 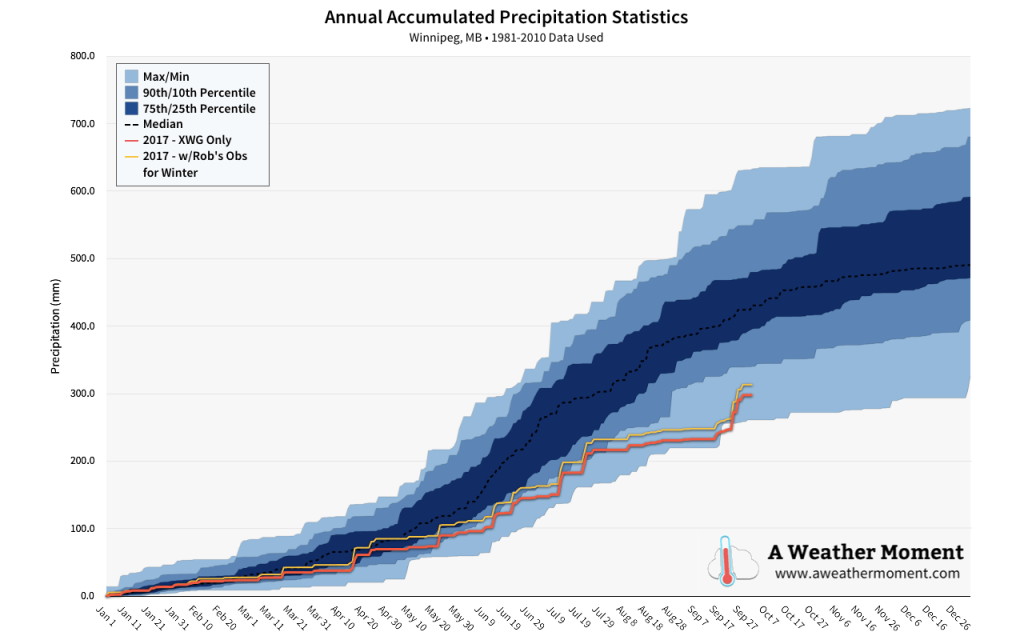 By mid-September, Winnipeg had crept into having the driest year since 1980, however the rainfall through the second half of the month has eliminated that potential by raising our annual precipitation amounts above the driest on record. Winnipeg still remains well below-normal, outside 2 standard deviations from the 1981-2010 normal amounts.

All in all, September was a beautiful month. Exceptional warmth through the first half gave way to near-seasonal temperatures in the second half, but overnight lows that remained well above-normal through much of the month helped keep that fall chill away until near the very end. The rainfall through the second half of the moth helped alleviate some of the drought that the region has seen, although Winnipeg still sits in a significant precipitation deficit for the year.

October has continued September’s trend so far with most of the days bringing above-normal temperatures to the region. Precipitation has been sparse, though, and little is on the horizon. Although Winnipeg saw its first snowfall of the year on October 14, temperatures will rebound well above-normal with unseasonably warm temperatures expected to build into the region later this week. With daytime highs nearly 10°C above normal and mild overnight lows, it looks poised to offer one last stretch of summer-ish weather before jacket weather arrives for good.

August was an interesting month regarding temperatures, particularly because the overall trend was shaped largely by the distinct lack of humidity. The monthly mean temperature ended up slightly below seasonal, but that was driven by unseasonably cool overnight lows. In fact, the average overnight low for August 2017 was 2°C below the seasonal average. Contrast that with daytime highs that were actually warmer than normal; August 2017 ended with an average high slightly above the seasonal average.

Perhaps of note, humidity levels were quite low through the month of August. We don’t quite have the dew point climatology set up here at A Weather Moment, so I asked Winnipeg’s resident weather statistician how August 2017 ranked in terms of average dew point:

So August 2017 ended up the 16th least humid of the last 64 years. The reason cooler nights can be linked to the low levels of humidity come from a simple physics lesson many learn in high school: dry air heats up – and conversely cools down – more quickly than water. The drier conditions allowed temperatures to climb high, but also allowed it to cool off more significantly at night.1 As an aside, this is why many humid places have smaller temperature ranges from day to night, while the driest places on earth typically have huge temperature ranges between day and night.

Another notable aspect of August 2017 was the distinct lack of rainfall. Typically Winnipeg will receive around 77 mm of rain through August, but this year the city received only 14.1 mm at the airport, a mere 18% of the normal monthly rainfall.

August was just another month in the story of summer 2017: it was dry. The summer season accumulated 136.7 mm of rain at the airport, which was just 56% of the seasonal normal of 244 mm.

The drier pattern began in May, and then has not relented. While other areas in the Red River Valley are not quite in as dry a spell as Winnipeg, a general trend of dryness has persisted across much of the region.

August 2017 had measurable precipitation on just 6 of 30 days, with the single largest one-day rainfall total of 6.7 mm on Wednesday August 9th.

August 2017 was actually quite a pleasant month in many ways: most days brought a pleasant and dry summer warmth while evenings were cool. The month brought plenty of sunshine with rain being an elusive sight, continuing the dry trend that began in May of this year.

September has been quite a different month so far, with significant warmth in place this month. Winnipeg hit the warmest day of 2017 on September 12th when temperatures climbed to a record-setting high of 34.8°C. Daytime highs and overnight lows have largely been above-normal much of the month. While rain was sparse at the beginning of the month, the latter half has so far shifted into a more unsettled pattern, bringing relatively frequent rainfalls to the region, although Winnipeg has managed to elude much of the activity.