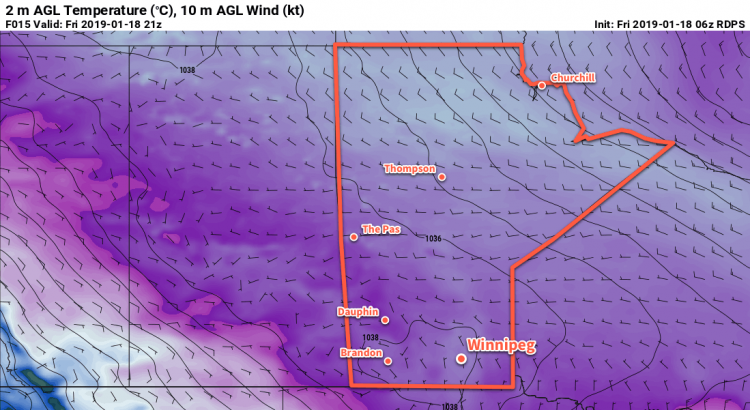 Winnipeg will endure the coldest weather so far this winter over the next couple days.

A potent Arctic ridge entrenched over the region will keep Winnipeg locked in bitterly cold Arctic air today and tomorrow. Temperatures will remain well below normal with daytime highs in the low minus 20s. Overnight lows dipping into the minus thirties, likely resulting in the continuation of extreme cold warnings from ECCC.

Winnipeg will see increasing cloud cover on Saturday evening as a more seasonal air mass pushes eastwards towards the province. Temperatures will dip into the -30s early in the evening, then slowly rise overnight. Sunday will bring mixed skies to the region with a chance of flurries. Winnipeg will finally escape the deep freeze as temperatures rise to a high near -16°C, however winds will be breezy out of the south near 30 km/h. More cloud will build into the region on Sunday night as temperatures continue to climb to around -13°C by Monday morning. It’s likely that Winnipeg will see periods of light snow on Sunday night, but it shouldn’t accumulate to much more than a dusting.

Winnipeg will see near-seasonal temperatures to start next week with cloudy conditions and a continued chance of flurries. The region will see variable cloudiness heading into mid-week, then a cold front is forecast bring slightly cooler than seasonal temperatures back to the region. At this point, next week’s cool-down doesn’t look as extreme as the current deep freeze gripping the city.