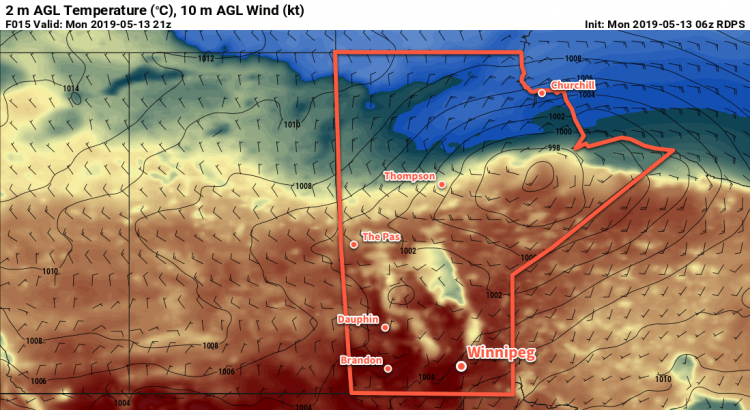 Several disturbances tracking across the southern Prairies will bring warm temperatures, variable cloudiness, and several chances for showers or thunderstorms.

Winnipeg will start the day with cloudy skies, but skies will clear a bit later this morning. After that, a truly summer-like day lies ahead as temperatures climb to a high near 24°C with light southerly winds. The city will see a chance of showers or thunderstorms late in the day as a cold front moves through. Skies will clear for the first half of the night as temperatures head to a low near 10°C. A low in Saskatchewan will spread cloud back into the region through the second half of the night, though.

Tuesday morning will kick off with a good chance of showers with a small chance of thunderstorms as a disturbance rolls through. After it moves through, skies should clear out fairly quickly leaving much of the day with sunny skies. Daytime highs will be cooler than today, but still pleasant at a seasonal 19°C with light winds. Temperatures will dip to a low near 6°C on Tuesday night under clear skies.

On Wednesday, Winnipeg will see increasing cloudiness as a low pressure system approaches from Saskatchewan. Southerly winds will strengthen to around 30 gusting 50 km/h, drawing mild air northwards. How warm it gets in the city will largely depend on how long the sun manages to shine. Around 21°C looks most likely, but if skies cloud up earlier in the day, temperatures may end up a bit cooler than that. Scattered showers and thunderstorms will develop on Wednesday evening as the low pressure system moves through. That activity will move out overnight with temperatures dropping to a low near 9°C with light winds.

Looking ahead, it appears that southern Manitoba will be entering a rather unsettled period as a large-scale upper pattern shift occurs. The city will see numerous chances for showers or thunderstorms through the latter half of the week and the weekend. By next week, depending on how things develop, Winnipeg may see itself launch into summer with humid conditions pushing northwards into the region. While there’s some uncertainty depending on how things evolve through the weekend, it does appear that things are finally shifting gears and heading towards summer!

Today’s seasonal daytime high in Winnipeg is 19°C while the seasonal overnight low is 5°C.