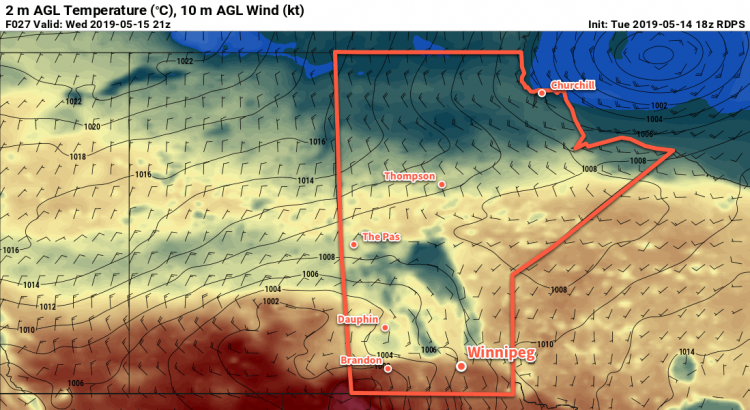 Southern Manitoba will see showers and thunderstorms today as a low pressure system moves into the province.

Winnipeg will see increasing cloud today as a low pressure system pushes a warm front into the province. The initial batch of showers with isolated thunderstorms will spread eastwards along a warm front into the Interlake this morning. This area of rain will likely will stay north of the Trans-Canada Highway, but there will be a small chance of scattered (thunder)showers further south through the day. With all the cloud cover over the region, highs will be seasonal despite the push of warmer air. Winnipeg should see a high near 18°C with breezy southerlies near 30 gusting 50 km/h.

The thunderstorm threat will increase this evening as a cold front begins working its way across southern Manitoba. This may end up being one of the first organized severe weather threats of the season for southern Manitoba. Going over the MIST ingredients:

All in all, it looks like there’s a good chance of marginally severe thunderstorms developing on Wednesday evening. Strong shear will support the development of multicellular thunderstorms that may grow upscale along the front into a line of showers and thunderstorms as the evening progresses. These thunderstorms will initiate near the Saskatchewan border and then progress east-southeast across the Red River Valley through the evening. Some of these thunderstorms may become severe with primary threats being large hail and/or damaging wind gusts. The convection will clear out in the evening with breezy northwest winds of 30 gusting 50 km/h picking up behind the cold front. Temperatures will dip to a low near 7°C.

Thursday and Friday will bring variable cloudiness as a developing storm system slowly intensifies. A ridge of high pressure extending from Nunavut southwards through the province will keep things seasonably cool and dry. Tonight’s northwesterly winds will slowly taper off through the day on Thursday, with light winds expected on Friday.

More cloud is on the way for the weekend with temperatures remaining in the mid-teens. Forecast models diverge on Sunday with American models suggesting a broad area of rain lifting northwards into southern Manitoba while the Canadian models keep things further south. With the strength of the ridging over Manitoba, I’m inclined to side with the Canadian models at this point, but we’ll certainly be keeping an eye on things to see how they develop.

Today’s seasonal daytime high in Winnipeg is 20°C while the seasonal overnight low is 5°C.