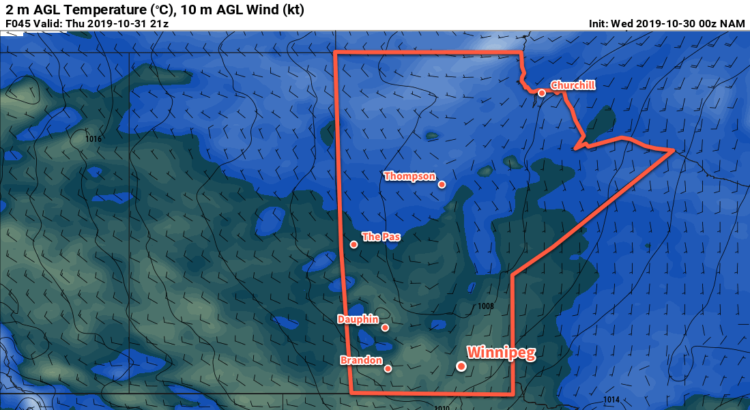 Below-seasonal temperatures will persist in Winnipeg through the rest of the work week. Skies will continue to be cloudier than not with a couple chances for some more light snow.

The city will see a mix of sun and cloud today as the upper trough responsible for yesterday’s cloud and flurries rotates off to the east. Temperatures will stay cool with a high near -1°C but winds won’t be too much of a bother at around 15 km/h out of the west. There is a chance of a scattered flurry, but nothing as intense as some of yesterday’s snow. If there are any snowflakes, it’s expected to be very light. Winds will shift to the south tonight as the next system approaches from the northwest. The city should see a low around -8°C with increasing cloud cover.1

Mainly cloudy skies will be in place on Thursday as a warm front pushes into the Red River Valley. Temperatures will climb back above freezing to a high near +3°C, but winds will also pick up out of the south into the 20 to 30 km/h range. The day should stay snow-free, but by late in the afternoon an area of light snow will begin pushing into the region from the northwest. Winds will shift northwesterly on Thursday night with light snow likely through much of the night. Accumulations will be minimal with just 1 to 2 cm in the forecast. Temperatures will dip to a low near -2°C.

Winnipeg will continue to be under a northwesterly flow on Friday with winds of 30 gusting 50 km/h. Fortunately, the passing low pressure system will have kicked out the core of the coldest air, so temperatures won’t be too bad. The city should see a high near +1°C. That said, skies will stay cloudy through the day with scattered flurries possible. There may also be some more lake-effect snow in the lee of the lakes. The winds will gradually ease on Friday night. Skies will be mixed to mostly cloudy through the night with temperatures dipping to a low near -4°C.

Today’s seasonal daytime high in Winnipeg is 4°C while the seasonal overnight low is -4°C.