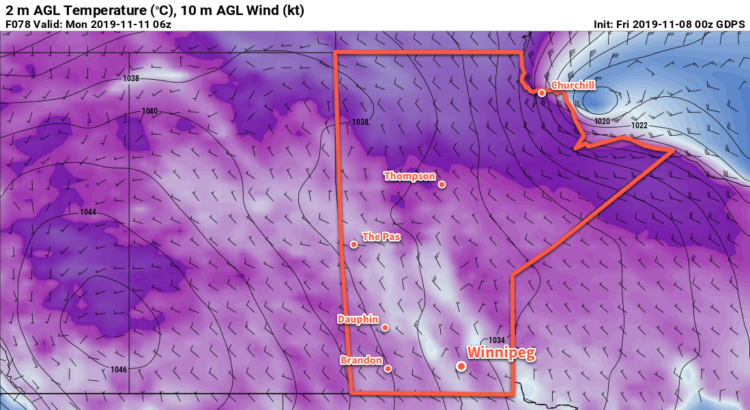 Southern Manitoba will see more light snow on Friday night and Saturday, ushering in another blast of Arctic air.

A low pressure system moving across the province will bring some milder air into the province alongside more light snow. Winnipeg will see temperatures climb to a high near -3°C today with southeast winds picking up into the 20 to 30 km/h range. Skies will stay mostly cloudy through the day.

As the low centre moves into the Red River Valley this evening, a shot of snow will move through the region. The snow should move through fairly quickly with a couple centimetres possible. The rest of the night should bring light winds and cloudy skies as temperatures dip to a low near -6°C.

Saturday will bring more cloud with highs once again climbing to around -3 or -2°C. There will be a chance for scattered flurries through the day. An Arctic ridge will begin pushing into the region and strengthen northwest winds into the 20 to 30 km/h range. Skies will begin to mix out overnight and the chance for flurries will shift towards streamers coming off of the lakes. Temperatures will dip a degree or two below -10°C on Saturday night as a reinforcing shot of Arctic air pushes southwards.

Temperatures will barely recover on Sunday with the city only seeing a high near -8°C. Northwest winds near picking up to 30 km/h will keep things feeling cold. There should be a bit of sunshine mixed in with the cloud across the region with a chance for some isolated flurries, particularly in the lee of the lakes. Winnipeg should see partly cloudy to mixed skies on Sunday night with a low near -17°C.

Another couple cold days will kick off next week as the Arctic air moves through, but a transition into more seasonal conditions should arrive midweek. No significant snowfall is in the forecast.

Today’s seasonal daytime high in Winnipeg is +1°C while the seasonal overnight low is -7°C.