Winnipeg will see breezy conditions with seasonably mild temperatures today, but a cold front passing through on Saturday will usher in an extended period of markedly cooler weather.

A low pressure system crossing the Prairies will finally bring seasonal temperatures back to southern Manitoba today. With a brisk southerly wind increasing to 30 gusting 50 km/h, temperatures will climb to a high near 11°C. Morning sunshine will give way to mixed skies, but things should stay dry with no precipitation in the forecast. The low will continue to advance towards the province tonight, keeping skies mixed and maintaining the southerly winds. Winnipeg should see a low near 7°C.

The city will still see seasonal temperatures on Saturday, but the day will be much less pleasant as a cold front sweeps through early in the morning. Temperatures will hover near the overnight low of 7°C then begin cooling later in the day. Winds will be breezy out of the west-northwest near 30 gusting 50 km/h and skies will be mostly cloudy. Again, no precipitation is forecast. Skies will stay cloudy on Saturday night with a northwest wind near 20 km/h and a low of -1°C.

Sunday will bring cloudy conditions to the city with temperatures remaining steady near 0°C. This will mark the beginning of a prolonged cold snap that will entrench the city in below-normal temperatures for the next week. The northwest winds will gradually ease through the day and into the evening. Some flurries will be possible in the city as the cold air and northwest wind will bring a chance of lake-effect snow off of Lake Manitoba. Temperatures will head to a low near -4°C on Sunday night with mostly cloudy skies.

Unfortunately, a long stretch of cold weather is on the way for Winnipeg. Arctic air will plunge southwards through much of North America through the week as a significant upper-level trough develops.

The result will be a week of variable cloudiness, temperatures struggling to reach 0°C, and several chances of accumulating snow. 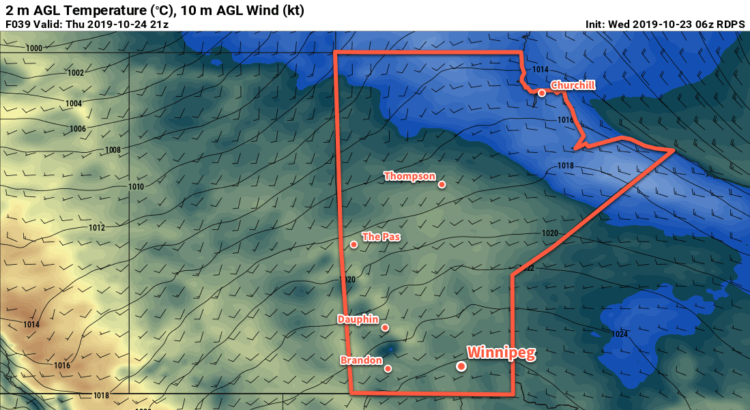 Winnipeg’s cool weather will stay for a couple more days, then warmer weather arrives for the end of the week.

A couple cool days are coming up for Winnipeg as an Arctic air mass remains entrenched over the region. The city will see a high of only 3°C today as northwest winds of 30 gusting 50 km/h continue. Skies will stay cloudy for much of the day as a combination of system1 and lake-effect cloud moves through.

As the day progresses and cooler air aloft pushes into the area, both Lake Winnipeg and Manitoba will likely begin to produce some lake-effect snow. Winnipeg may see some of this snow or rain in the morning. By the afternoon, the precipitation will mainly fall in the lee of the lakes. With a northwest wind, this will likely mean that Winnipeg will end up between a band of snow or rain showers to the west and to the east.

The lake-effect precipitation will taper off overnight as the winds ease and turn westerly. The city will see a low near -2°C as the cloud cover begins breaking up.

Thursday will be a cool day with a high of just +4°C. A ridge of high pressure moving through will keep the winds light, but skies will remain partly cloudy to mixed. A warm front pushing eastwards across the Prairies will spread a southerly wind into the Red River Valley on Thursday night along with a bit of cloud. Winnipeg’s low will sit somewhere around the freezing mark.

A return to seasonal warmth arrives on Friday as temperatures climb to a high near 10°C. The region will likely see a fair amount of cloud as the warmer air pushes as well as a strengthening southerly wind into the 30 to 40 km/h range. These breezy winds will persist through the night, keeping the low relatively mild at around 6°C.

Seasonal warmth will stick around for Saturday, but a passing low will send a cold front sweeping through the region on Saturday night. While the Red River Valley won’t see much precipitation, it will plunge the region into an extended stretch of below-seasonal temperatures. There isn’t much rain or snow in the extended forecast, but with the cooler temperatures it’s likely that lake-effect flurries will be relatively common in the coming week.

Cold and wet weather will stick around in Winnipeg for another few days.

Winnipeg will get another soaking today as more rain moves through the region. The rain will intensify early this morning as the low responsible for all this wet weather moves through the Dakotas. Much of the Red River Valley, including Winnipeg, will see another 15 to 30 mm of rain before it tapers off through the afternoon. Northerly winds near 30 km/h will keep things cool with a high of just 8°C. Temperatures will dip down to a low near +2°C tonight with north-northwest winds of 10 to 20 km/h. Some lake effect snow or rain showers are possible in the lee of Lake Manitoba and Lake Winnipeg tonight.

The region will see a brief break from the rain on Tuesday as an arctic ridge moves across the province. It won’t bring much sun, though, with mainly cloudy skies persisting across southern Manitoba. Temperatures will be cool again with a high near 7°C in Winnipeg with northerly winds of 15 to 20 km/h. The chance for lake-effect rain showers or flurries will continue in the lee of the lakes for much of the day. Winnipeg will see a low near +2°C again with light winds tonight under cloudy skies.

Rain will taper off for the rest of the work week with highs climbing back into the low teens. Some sun will work back into the region for Thursday and Friday as well.

That said, another low looks to move towards the region to start the weekend, with another 5 to 10 mm possible on Saturday. Forecasts show things finally settling heading through the latter half of the weekend into next week. Temperatures are forecast to return to seasonal values early next week.

Today’s seasonal daytime high in Winnipeg is 15°C while the seasonal overnight low is +3°C.

Arctic air will continue to build southward over the eastern Prairies in the coming days, bringing below-seasonal temperatures, variable cloudiness, and on Wednesday, some light snow.

Cloud will build into Winnipeg from the northwest later today as a cold front slumps southwards out of northern Manitoba, possibly bringing the occasional snowflake, but nothing that resembles accumulating snow. Temperatures remain cool with a high near -6°C, almost 9°C below seasonal for this time of year. Winds will continue out of the west at around 15 to 20 km/h through the day today. Skies should clear out overnight as temperatures head to a chilly low near -17°C. Winds will remain out of the west at 10 to 15 km/h.

Tuesday will see morning sun transition to mixed skies as another disturbance approaches from the northern Prairies. Temperatures will be similar to Monday with highs near -6°C again, but Tuesday night will be considerably warmer with lows near -9°C courtesy overcast skies that will move into the region. Winds will shift from west to northwest on Tuesday night, setting the stage for cooler air to move in on Wednesday.

Expect cloudy skies on Wednesday with some light snow and a cool high near -8C. Those northwesterly winds will likely fire up the lake-effect snow once again, enhancing the flurries to the south of Lake Manitoba and Lake Winnipeg.

Expect the clouds to persist much of Wednesday night with temperatures dropping to a low near -16°C.

The remainder of the week will continue to bring mixed skies with the occasional chance for flurries. By Saturday, temperatures should begin to climb back towards the freezing mark, with near-seasonal temperatures expected to start next week!