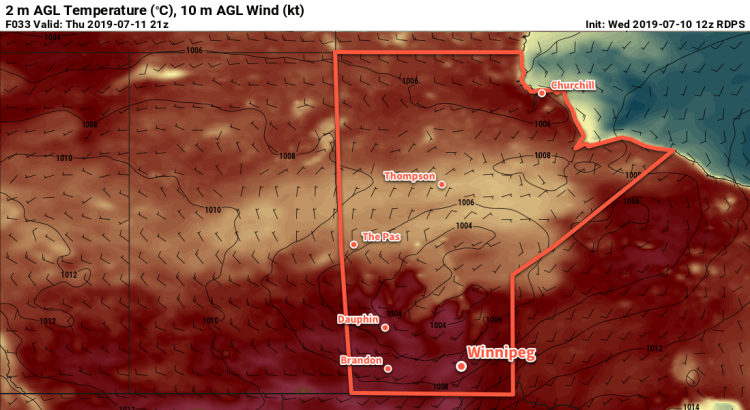 Winnipeg will see plenty of sun through the rest of the week, but humid weather returns on Thursday with another round of thunderstorms possible.

Today will bring sunshine back to the region with northwesterly winds help get things drying out after yesterday’s deluge. After the chance of a few morning showers, skies should clear out and temperatures will climb to a high near 25°C for the afternoon. The winds will diminish this evening, leaving the city with a few clouds as temperatures head to a low near 13°C.

The settled weather won’t last long, though. Another low pressure system will move into the region from the west on Thursday. Ahead of the low, humid conditions will once again develop and temperatures will climb to a high near 28°C. Skies will be mixed through the day with moderate southerly winds of 30 to 40 km/h developing in the afternoon.

Thunderstorms will initiate in the afternoon over WestMan into the Interlake in the afternoon, then move southeastwards. The storms will likely enter the Red River Valley near 6-7 PM and push through over the next couple hours. The main threat from these thunderstorms will be large hail and damaging winds, but the humid conditions will also support heavy rainfall. Shortly after the trough moves through, a weaker cold front will slump south through the region. There may be a few showers or isolated thunderstorms along the front as it passes, but it will carry no severe weather threat. The cold front will move through after midnight leaving behind mixed skies as temperatures dip to a low near 16°C.

The city will see partly cloudy skies on Friday as a weak ridge of high pressure moves through the region. Temperatures should reach a high near 24°C and humidity levels should be more comfortable. Winds will be light out of the northwest. Friday night will be pleasant with a low near 13°C under clear skies.

The weekend is looking warm with highs approaching 30°C and increasing humidity. As a result, overnight lows will also be warm, likely close to the 20°C mark. Winnipeg is not forecast to get any rain, but disturbances will pass to the south and the north of the city so there will be a low chance of a passing shower or two.