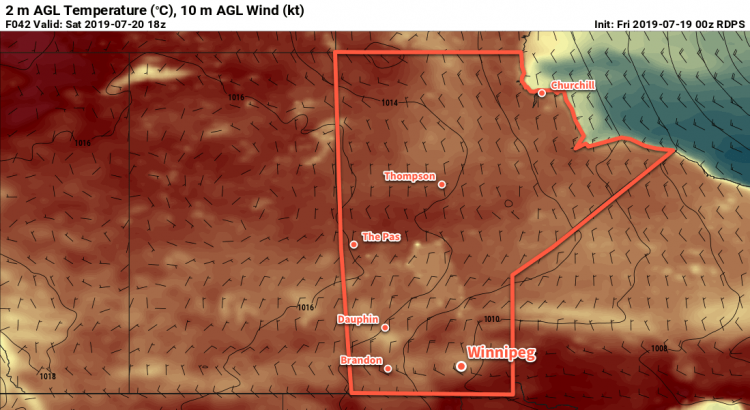 Winnipeg will get to enjoy sunny to partly cloudy skies right through the weekend.

Winnipeg will find itself between two main weather features today: a trough of low pressure laying across the Interlake, and a mid-level disturbance zipping along near the U.S. border. Not being directly affected by either system, the city will see plenty of sunshine today. With a few clouds grazing by, temperatures will climb to a high near 26°C. Winds will be breezy out of the west-southwest at up to 30 gusting 50 km/h. Skies will clear out tonight with winds easing as temperatures head to a low near 15°C.

Saturday will bring partly cloudy skies to the city again as a cold front slumps southwards. Winds will shift out to the north-northwest in the morning, picking up into the 20 to 30 km/h range. There might be a slight chance of a shower midday as the front passes, but it looks like things should stay dry. Temperatures will reach a high near 23 or 24°C behind the front. Winds will taper off in the evening as temperatures head to a low near 12°C.

On Sunday, a ridge of high pressure will slowly build into southern Manitoba. As a result, the city will see mainly sunny conditions with northwest winds around 20 km/h. Temperatures will climb to a high near 23°C, then dip to a low near 13°C on Sunday night.

Next week will see temperatures climbing back into the upper 20s or low 30s as an upper ridge redevelops over the Prairies. Winnipeg should see plenty of sunshine through the first half of the week, then unsettled weather may return for the second half into the weekend.