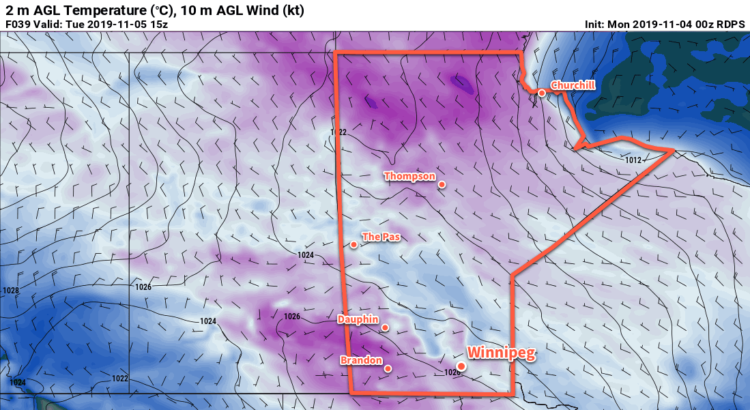 An Arctic airmass will move into the Prairies this week, ushering in below-seasonal temperatures for the rest of the week.

A cold front pushing through southern Manitoba this morning will bring a bit of snow to the region and mark the start of a much colder temperature regime. A bit of light snow will taper off later this morning, leaving behind mixed skies with a chance of flurries. Winds will pick up out of the northwest to around 30 gusting 50 km/h, ushering in a colder Arctic airmass. As a result, temperatures will hover around -4°C then begin to fall in the late afternoon. The city will continue to see partly cloudy to mixed skies overnight with winds diminishing. A few flurries may be possible if the lake-effect cloud from Lake Manitoba manages to push into the city overnight. Temperatures will drop to a low near -11°C.

Temperatures will struggle to recover on Tuesday. Partly cloudy skies will see increasing cloud later in the day, but winds will stay light throughout. Winnipeg will see a high near -5°C. Some light snow is possible on Tuesday night as another push of cold air builds southwards. Winds will pick up out of the northwest to around 20 km/h overnight as temperatures drop to a low near -9°C.

A large Arctic high will build into the region on Wednesday, bringing brisk northwest winds near 30 km/h. Temperatures will again climb to a high near -5°C with mixed skies and a chance of scattered flurries through the day. The region will continue to see partly cloudy conditions on Wednesday night. Winds will ease and temperatures will dip to a low near -12°C.

Unfortunately the colder weather his here to stay for the foreseeable future. Temperatures may warm a few degrees on Friday, but the cold weather quickly returns for the weekend. There is no significant snowfall in the forecast through the weekend into the first half of next week.

Today’s seasonal daytime high in Winnipeg is +2°C while the seasonal overnight low is -6°C.