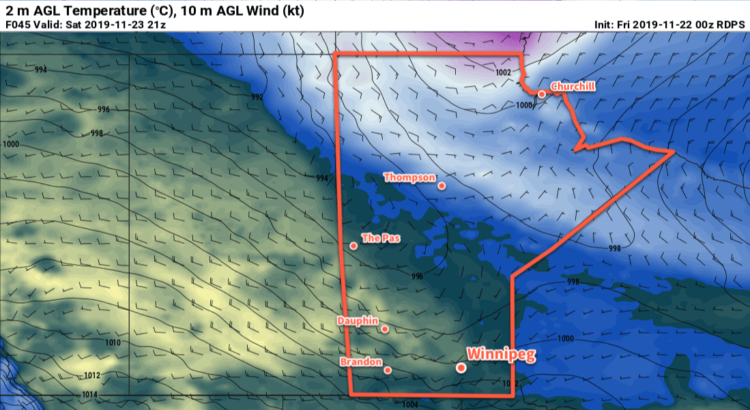 A surge of Pacific air will sweep across southern Manitoba today, ushering in milder temperatures for the weekend.

The cooler conditions that settled in behind Wednesday’s snow will be kicked out today as mild Pacific air moves in. The push of warmer air will bring mainly sunny skies and southerly winds near 30 gusting 50 km/h to the region. Temperatures will climb back towards the freezing mark, but the new snowpack will likely keep temperatures from rising much further. Winds will ease this evening as Winnipeg heads to a low near -5°C tonight under partly cloudy skies.

Winds will shift southwesterly on Saturday as another surge of warm air pushes eastwards. As the winds strengthen into the 20 to 30 km/h range, Winnipeg will see temperatures rise to a high near +2°C under mixed skies. Winds will gradually ease overnight and temperatures will dip to a low near -2°C under partly cloudy skies.

Temperatures will gradually cool through the first half of next week back to seasonal values. Conditions will be fairly pleasant, though, with light winds and variable skies. Indications are that cloud will return for the latter half of the week with the potential for some more snow through the region.

Today’s seasonal daytime high in Winnipeg is -4°C while the seasonal overnight low is -12°C.