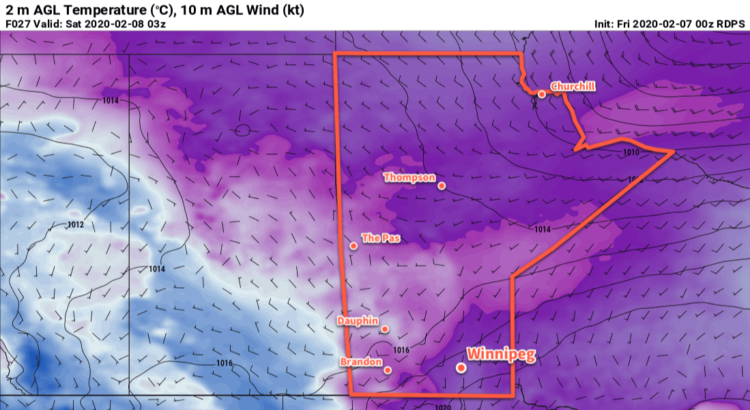 An Arctic high will bring cold weather to Winnipeg today, but seasonal temperatures return alongside some flurries for the weekend.

A sprawling Arctic high will move through southern Manitoba today, bringing with it colder weather. Winnipeg will see a seasonably cold high of -18°C with light winds. Skies will stay sunny for most of the day, but there will be a chance of some cloud moving in late in the day as it drifts towards the region from the northwest. Cloud cover will continue to build in tonight with southerly winds of 10 to 20 km/h. A weak warm front pushing into the region will help keep temperatures a tad warmer than last night with a low near -24°C.

Saturday will bring mostly cloudy skies as an upper-level disturbance rolls over the region. Temperatures will rebound nicely to a near-seasonal high of -11°C with light winds. Some flurries will move through over the course of the day, but will be most likely through the morning hours. The cloud will break up a bit for Saturday night as temperatures head to a low near -20°C.

The city will see mixed to cloudy skies on Sunday as another low pressure system begins to build across Saskatchewan. Temperatures will climb back to around -9°C, but winds will pick up out of the south to around 30 km/h through the afternoon. Those winds will persist through the night alongside cloudier skies and keep temperatures steady around -10°C.

More flurries are likely on Monday as mild air continues to push into the region. Temperatures will stay seasonably warm through Tuesday with highs climbing to around -6°C. A cold front is forecast to sweep through mid-week, bringing a chance for some more light snow and a return of colder weather. Through the second half of the week, daytime highs are forecast to drop back into the -15 to -20°C range with overnight lows dipping into the -20 to -25°C range.

These cooler conditions will likely stick around through the weekend; the shift in temperatures will be largely driven by the polar vortex as it shifts back from the High Arctic into Hudson Bay, bringing bitter cold to Canada’s eastern Arctic and supply colder air to the eastern Prairies.

Today’s seasonal daytime high in Winnipeg is -10°C while the seasonal overnight low is -20°C.