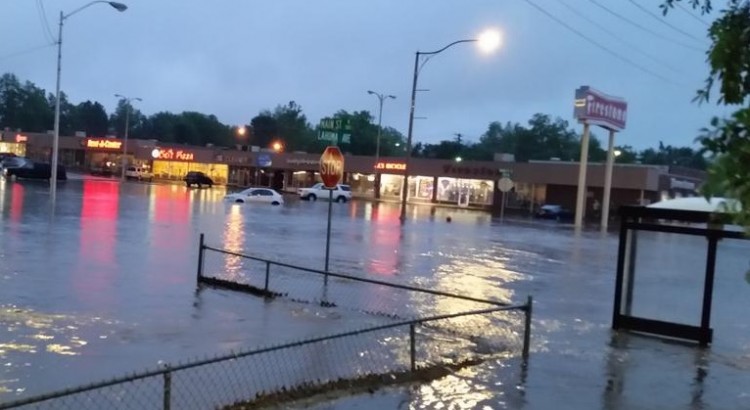 The western troughing pattern, with occasional cut-off lows that have been hanging around the west coast have done good work in eliminating the drought that was entrenched in the Southern Plains past few years. The copious amounts of rain that have fallen in the last month or so has not only taken out a large part of the drought, but caused serious flooding issues in the region. This heavy rainfall stemmed from several storm types; rounds of trailing severe thunderstorms, large areas of stratiform rain as well as slow moving storms the would drop significant amounts of rain. These have all occurred in the Oklahoma/north Texas region since the end of April.

The flooding is not only wreaking havoc on farmers in the area, whose crops are struggling due to all the rain, but also the general population as several major highways in the region have been washed out and forced to close. Lake Eufalufa, one of Oklahoma’s major lakes is currently 14 feet above normal, causing many campsites nearby to be shut down. In Wichita Falls, Texas, neighbourhoods in low-lying areas were forced to evacuate ahead of the next system – the city announced they would be cutting power at all these neighbourhoods to prevent electrical fires. In Norman, Oklahoma, heavy rains from trailing storms turned parts of its Main Street into a fast flowing river this past week. It’s unclear how many people have been affected since the beginning of May throughout the south but two people are known to have died in the floods. The good news is the extreme drought, which covered 29% of the region last year, is now down to 0%.

More rain is in the forecast for most of these regions this weekend – with possibly another significant rainfall in the works. In some of the hardest hit areas, such as central Oklahoma, more than 75 additional millimetres could fall this weekend; flood watches are already in effect and meteorologists are urging residents to limit travel.

Early May is typically when the severe weather season really ramps up in the US Plains and this week has certainly lived up to that. The region has seen severe weather every day since Wednesday and is expected to see more today. A western troughing pattern has been dominant the past few days, allowing a strong southerly flow to take place in the lower levels of the atmosphere – advecting in plenty of moisture from the Gulf of Mexico located nearby. High levels of instability, coupled with enough shear to support supercells was in place.

The worst day of the outbreak tornado-wise occurred on Wednesday where 48 tornadoes touched down from Nebraska, all the way down to Texas. A particularly dangerous situation unfolded in Oklahoma as a supercell with a history of producing tornadoes moved northeast along I-44 and through the large city of Norman where it dropped a tornado, later rated EF-1. The same supercell also produced an EF-2 tornado near Bridge Creek, shortly before it dropped the Norman tornado. Tornadoes were not the only threat on Wednesday; significant rains fell across Oklahoma, including Oklahoma City, which saw trailing supercells hit the city and as a result severe flash flooding. One person died from the storms, while a few dozen were injured. Ditches became raging creeks that spilled their banks onto highways and residential areas. It’s not uncommon to see supercells drop 100mm of rain or more in an hour. Radar indicated that some areas just southwest of Oklahoma City saw over 250mm on Wednesday. Numerous stations in the area broke their daily rainfall records from this event. A state of emergency was issued in 12 counties as a result of the storms.

More severe weather is expected today as the trough shifts slightly eastwards. There’s a chance that today could be the second significant tornado day in less than a week in the Plains – Kansas, southeast Colorado and northern Oklahoma regions are under the gun. However, there are still a few uncertainties due to the models showing some mid-day convection possibly limiting the heating. The Storm Prediction Center had issued a moderate risk for the region as of Friday night. Regardless of what happens in the first half of the day, there will be severe storms; residents in the region will have to keep an eye on the sky for large hail, severe winds, torrential rains and even tornadoes!

Elsewhere in Weather News posts are beginning to sound like a broken record with all the recent flooding stories coming out of Australia. This past week there were yet again significant flash flooding problems across regions of Australia.

Northern New South Wales and southern Queensland were hardest hit this time as a low pressure quickly wrapped up just off the Eastern Coast of Australia – very similar to the setup that occurred last week. Observation sites indicate that there was a large swath of 150-200mm that fell across Northern NSW along the coast in just over 24 hours. With already saturated soils from the past week’s storm that dumped around 50mm in the same area, conditions were primed for flash flooding once the heavier rain bands arrived. Similar to last week’s low featured in EIWN, strong wind gusts of up to 100km/h were also observed.

Flash flooding was the main cause of the damage in the region once again, as roads washed out and numerous homes were inundated. The Wilson and Lismore rivers were expected to peak later today at a moderate flood stage, meaning that properties along the banks of the rivers are at risk. In total, six people died from the most recent flood events, five of the six as they attempted to drive through flood waters that covered roads. This brings a harsh reminder to residents that when roads get flooded out it’s best to turn around and not drive through.

The east coast low wasn’t the only form of severe weather to affect Australia this past week – a cyclone also formed in the Eastern Indian Ocean and strengthened in to a category four over open waters. After substantially weakening due to cooler waters near Australia’s coast the system made landfall on Northwestern Australia’s shores as a tropical storm, prompting officials to issue rainfall warnings in the region. Damage from the storm appears to have been minimal, other than some minor flooding.

A persistent area of low pressure off the coast of Eastern Australia is to blame for extreme amounts of rainfall that fell during the mid-week.

An upper level low that was cut-off from the main jet stream to the south was the reason for the slow movement of the surface low. Sydney and surrounding regions were hardest hit from the storm where over 300mm fell in some areas in less than 24 hours. Dungog and Maitland, towns north of Sydney, received some of the highest amounts in the region; 312mm fell in Dungog in 24 hours and 301mm fell in Maitland in the same amount of time. Sydney received 225mm during a two-day span – relatively speaking, this is a significant rainfall for them. According to the Australian Bureau of Meteorology this was the most rain Sydney has received during two-day period in more than a decade. What made conditions even worse was that winds howled to 80km/h in Sydney and over 130km/h in three separate regions on the east coast of Australia. The high winds made for swells of over 6m out at sea.

Due to the high winds and flooding rains, power to 215,000 people was knocked out in the region. In addition to that, creeks quickly became dangerous, fast-flowing rivers in the Dungog region. Several houses in Dungog were washed away due to the floodwaters and unfortunately four people perished.  There were also 150 water rescues that had to be executed. As of Friday morning where were still a few thousand people isolated by floodwaters that cut off main roads. In total, 12 communities were officially declared a natural disaster area by the government – insurance companies estimate the damage to be around 100 million dollars.

Since then the soggy weather has continued, off and on, throughout the end of the week. With another system and associated cold from arriving from the west today, the chance for rain continues – amounts will be nowhere near the ones that were observed this past week, however.