Cooler temperatures are moving back into the region today behind a cold front that passed through overnight. This cooler weather will persist for several days as an upper-level trough builds over the Prairies, driving the jet stream southwards.

Winter will gradually slump back into Winnipeg as cooler weather slowly pushes southwards through the Prairies, although temperatures will be moderated by an extensive area of low-level clouds that will likely take their time in breaking up.

Today will be the warmest day of the next few with temperatures topping out near 0°C, although a northerly wind at around 20 km/h will be tapping into cooler air to the north. Skies will remain cloudy, though, and a few remaining morning flurries will exit the region early, leaving behind a slight chance for some freezing drizzle. The chance for freezing drizzle will continue overnight as temperatures drop to a low near -8°C.

Thursday will continue with fairly cloudy skies; there’s some uncertainty as to how much clearing will manage to occur through the day but in general, expect skies on the cloudier side through the day. Temperatures will climb to a high near -4°C with light northerly winds continuing. Skies may clear a bit in the afternoon, but I’m leaning towards cloudier conditions. We’ll have to see how/if the low cloud begins breaking up over the northern Prairies today as to how much clearing we may see on Thursday. Temperatures will drop to around -11°C on Thursday night with mixed skies.

Temperatures will continue at near-seasonal values with not too much in the way of snow. Some guidance hints at a system that would bring 2-5 cm of snow to the region on Sunday, but there’s still disagreement on that. After that, it appears that there may be another chance for snow mid-week next week. All in all, though, fairly quiet weather ahead!

The weather will continue to be fairly unremarkable in Winnipeg through the weekend as a fair amount of cloud and above-normal temperatures continue.

More of what’s been in place much of the week is on the way for Winnipeg this weekend. Today will bring highs near -2°C with skies becoming cloudy in the afternoon. Temperatures will dip back down to around -8°C tonight and bounce back to a high of -3°C on Saturday, all while under cloudy skies with a chance of flurries. Sunday will bring mixed to cloudy skies with a continued chance of a scattered light flurry or two as temperatures climb to a high near -6°C. More cloud will move in on Sunday night with temperatures climbing to around -4°C by Monday morning.

Winds will be breezy out of the northwest today at around 30 km/h. They will ease off tonight, and then we’ll see variable winds through the weekend of around 10-20 km/h.

Monday has the potential to bring the next organized snowfall to the city as a low pressure system pushes across the region. There’s a lot of uncertainty as to how far south this system will go, but in general it appears that 4-8 cm of snow seems likely for Winnipeg with gusty northwesterly winds in the wake of the system.

After this system, it looks like Southern Manitoba will move into a pattern shift towards seasonal to slightly below-seasonal temperatures.

Temperatures will dip slightly through the second half of the week as breezy northwesterly winds develop across Southern Manitoba.

It’s another fairly simple forecast for the coming days ahead as little changes in the weather other than a slight shift in temperatures.

As a potent low pressure system that brought a wintry mix to South Dakota yesterday moves off into Eastern Canada, the slack flow that’s been in place over the province for the past week will be replaced by a northwesterly flow with breezy winds that will tap into slightly cooler temperatures.

Today will bring winds of 10-20 km/h and temperatures steady around -6°C. There will be a very slight chance of some flurries, but they would be quite light and scattered. Skies will be fairly cloudy, although a brief sunny break or two can’t be ruled out.

Temperatures will dip to around -11°C tonight, the coldest overnight low since January 17th when the mercury dipped to -16.0°C early in the morning.

Thursday will bring a cooler high temperature and relatively light winds as a ridge of high pressure passes across southern Manitoba. Temperatures will top out around -7°C with cloudy skies in the morning giving way to some sunny breaks in the afternoon. Temperatures will dip to a low near -12°C once again on Thursday night under partly cloudy skies.

Friday brings mixed skies and strengthening northwesterly winds to 30-40 km/h. Temperatures will climb to a high near -3°C. It looks like the cloud cover will be reinforced late Friday, moderating overnight lows slightly as the temperature drops to about -8°C.

The weekend will continue the trend of above normal temperatures and cloudy skies. Don’t expect to see much sunshine as a slight chance of light, scattered flurries persists through the weekend.

While the cold snap earlier this month seems to be a vivid memory of many people I talk to, it actually hasn’t been a cold month at all, temperature-wise.

The cold snap began on January 3rd and persisted through January 14th. Throughout that period, daytime highs averaged -17.6°C (4.5°C below normal) while overnight lows averaged -28.1 (5.1°C below normal). This resulted in a mean temperature of -22.8°C for that 12-day stretch, which is 4.8°C below normal.

All that to say, the warm has been much more unseasonable than the cold. January currently sits with a monthly mean temperature of -14.3°C, which is 3.7°C above normal.

Temperatures are expected to remain mild, albeit not as warm as we experienced earlier in the week, with daytime highs hovering between -8 and -1°C through the end of January. This means that another month of above-normal temperatures will likely be recorded in Winnipeg when January draws to a close. 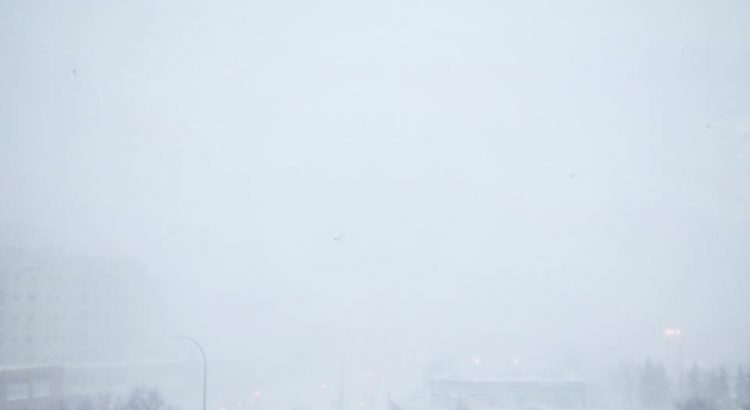 A potent Mackenzie Low dropped southeastwards through Saskatchewan yesterday riding along with a frontal wave that increased temperatures here in Winnipeg overnight. Behind this system is—for one of the first times this year—a potent Arctic air mass ready to surge southwards.

As a result, very strong winds developed in the rear of the cold front, supported through a deep layer as evident by a 120 km/h+ jet just off the surface that was visible on Doppler RADAR earlier this morning. Surface winds reached as high as 80-90 km/h behind the cold front which, combined with plenty of loose snow from our extra fluffy snowfall event the other day and some light falling snow, produced white-out conditions across many parts of Southern Manitoba.

The strong winds will move off to the east-southeast with the low pressure system through the morning and visibilities will improve. However, that bitterly cold Arctic air mass will move in through the day, sending temperatures south to around -26 or -27°C by the end of the afternoon here in Winnipeg. Temperatures will continue to drop to a low near -33°C on Friday morning with wind chill values of -42 to -45.

The cold weather will be short-lived as a mild Pacific air mass will begin building into the region this weekend.