There’s no end to the mild weather in sight thanks to a stagnant weather pattern that will persist through the remainder of the week. For those that love the sun, it will be a hard week as cloudy conditions persist with a continued chance of light flurry or freezing drizzle activity.

This weekend was a notable one when it came to warmth in Winnipeg as temperatures remained above 0°C for a record-breaking 66 hours, breaking the old record of 44 hours set on January 8/9, 2002. Temperatures first climbed above 0°C at 3PM on Friday January 20th and remained there all the way through 11PM on January 22.

This record mild spell broke no record high temperatures, but did result in a couple of rainfalls that brought January 2017 to the 2nd rainiest on record with 3.6 mm so far. The rainiest January on record is 1944 when 3.7 mm fell.

So, all that said, the forecast for the next few days is simple.

Cloudy. Today and tomorrow will both bring a continued chance for some light flurry or freezing drizzle activity across the Red River Valley with temperatures topping out near -1°C and light winds. Lows will be near -5°C both tonight and tomorrow night.

The area of low pressure that’s entrenched over the region will begin moving out on Tuesday night, allowing some more organized northwesterly winds to develop across the Red River Valley. Winds will strengthen to 20-30 km/h by Wednesday morning and continue throughout the remainder of the day. Temperatures will be cooler with that northwest flow; highs will top out around -3°C and flurries will be widespread across southern Manitoba. Temperatures will dip to a low near -8°C under more cloudy skies on Wednesday night.

Winnipeg will see a reprieve from the damp, cloudy weather this weekend as the clouds clear out later today and clear to mixed skies move in. Alongside the sun, daytime highs over 5°C above normal will remain in place, continuing the likely record-setting above normal temperature trend seen for the entirety of November so far.

Today will start off cloudy, however throughout the afternoon the clouds should begin to break up as some drier air moves in from the southwest. Without the persistent fog and mist in place, temperatures will have a bit more mobility than they have the past couple days, and Winnipeg should see a daytime high near 3°C. Winds should remain fairly light through the day out of the south to southwest. Expect clear skies giving way to a bit of cloud on Friday night, with temperatures dipping to a low near -3°C.

Saturday morning will start off with some cloud in the area as a warm front pushes through, but then we should see clearing and some sunshine for the afternoon.1 Temperatures should climb to a high near 3°C again with light winds out of the south to southeast. Skies should remain fairly clear on Saturday night with a low near -3°C again.

Sunday will bring increasing cloud to the city through the day as a significant weather system begins organizing south of the border. While skies will be mixed, temperatures will still be pleasant with highs yet again near 3°C. Winds will be out of the southeast at 10-20 km/h. Cloud cover will increase on Sunday night with temperatures dipping down to around 0°C.

So far November has had an average overnight low of -0.8°C, with a forecast month-average of -1.0°C. This is a whopping 2.2°C above the previous record of -3.2°C set in 1923. The monthly mean temperature is forecast to end up at about 2.6°C, which crushes the previous record by 1.3°C. To put that in perspective, Winnipeg is forecast to break the previous monthly mean temperature record by the same amount as the spread from the current record to the 10th place entry.

The start of next week threatens another winter storm for the region as a Colorado Low moves into Minnesota. Again there’s quite a bit of uncertainty as to how progressive the system will be and whether it will back into the Red River Valley or end up further east and missing the province. The general agreement is that the Red River Valley will be hit by this system, but how much precipitation will fall is a wild card.

The big challenge with this system, should it actually hit the Red River Valley, will be what will actually fall out of the sky. Best indications are that much of what falls may actually be rain rather than snow, but it’s far too early to put too much stock in any particular forecast other than saying that this system, should it hit Winnipeg, will likely bring a wintery mix to the region. We’ll be keeping an eye on it as the system develops!

Temperatures will be startlingly colder this weekend than we’ve seen through the first half of November, but despite the shock to the system, Winnipeg will simply be seeing temperatures closer to typical values for this time of year.

The weather through the weekend will be relatively benign overall, with the major storm system forecast once upon a time to slam the Manitoba Red River Valley now taking a significantly more southwards track, instead tracking across central Minnesota into Northern Ontario. With that major system moving through to our south, we’ll be left with cloudy skies and a brisk north wind to 30 gusting 50 km/h. Temperatures will be much cooler with a high near +1°C

As cooler air slumps southwards through the day, narrow bands of lake-effect snow will fire up off of the south basin of Lake Winnipeg. At this point, it appears that the line will run north-south and primarily impact a line between Selkirk and St. Clements southwards towards Springfield. Beausejour may end up just east of the main band, but slight shifts in the wind direction could shift the heaviest band east or westwards. Lighter flurries may make it all the way south of Steinbach. By the time the lake-effect tapers off on Saturday morning, anywhere from 5-15cm of snow may accumulate under the heaviest axis of snow.

Skies will begin to clear out on Saturday night, save for locations that see cloud streaming off the lakes. Winds will taper off and temperatures should dip to a low near -6°C.

Saturday will bring a ridge of high pressure to the province, quashing the lake-effect snow and bringing a bit of sunshine and light winds. Highs will reach around 0°C under mixed skies. Saturday night will be partly cloudy with a low near -5°C.

Sunday will bring increasing cloud ahead of a warm front pushing eastwards across the southern Prairies. Temperatures will climb to a high near -1°C with a brisk southeasterly wind at 20-30 km/h. Expect fairly cloudy skies with a chance of some light snow on Sunday night with a low near -4°C.

As mentioned up top, while these cooler temperatures are a shock to the system, we’re simply in a rapid adjustment back towards seasonal temperatures.

November has been a phenomenally warm month so far, with an average high of 11.3°C, a whopping 9.8°C warmer than the typical average high of 1.4°C through the same 17-day period. Including overnight lows, mean temperatures have been over 6°C above normal, more typical of mid-October than November, and November 2016 has taken the crown with the warmest first half1 of November on record.

And, while a brief seasonal snap is on the way, models indicate that by next weekend above-normal temperatures will be back in full force, which could enter the month into the competition for warmest November on record!

The system pushing the warm front eastwards across the Prairies on Sunday will continue to push eastwards and bring another chance for snow to the region on Tuesday. After that, it appears that a series of low pressure systems will track to our north and begin building warmer air back into the Prairies. 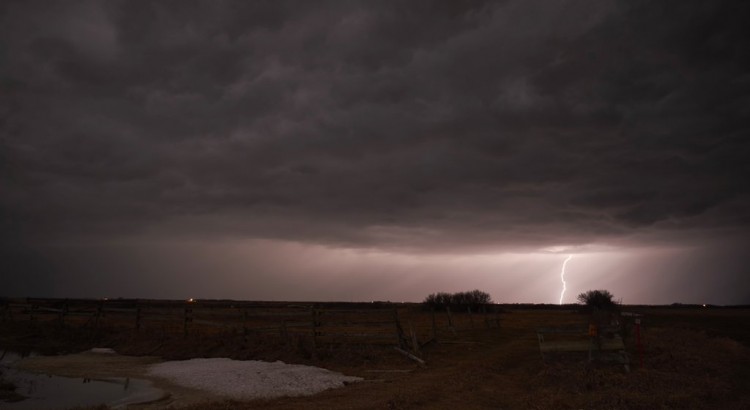