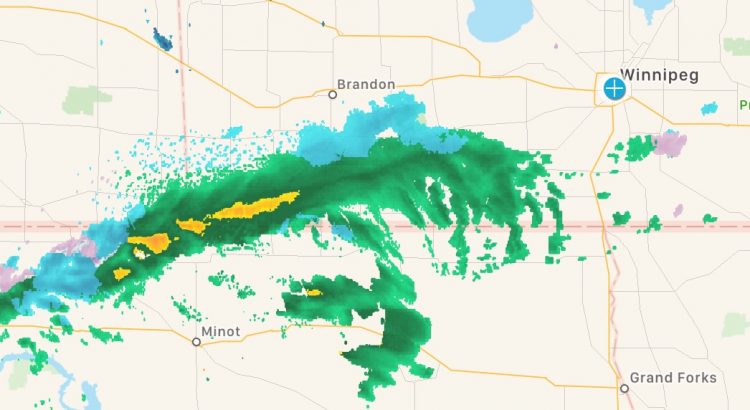 The disturbance that we wrote about in our forecast that went live early this morning is throwing a wrench into things as it has progressed eastwards much faster than models had anticipated, already spreading across southwestern Manitoba into the Red River Valley. This will dramatically change the forecast for Saturday morning and afternoon.

As of writing, the system is producing a line of precipitation extending from the Manitoba/Saskatchewan/North Dakota border east-northeast along a line that runs just through Boissevain and Deloraine into the Red River Valley. Much of the precipitation from this line is currently falling as rain, however snow is likely mixing in on the northern edge of the band, where temperatures have dropped towards the freezing mark.

Precipitation will push east-northeast throughout the night, however where it is expected to be heavy enough to accumulate in any meaningful way will lie along a very narrow band roughly located where the heaviest of the precipitation is as of this writing.

Much of this will likely remain as rain; there’s a fair amount of warm air aloft and temperatures are being maintained around 2-4°C underneath the precipitation. As mentioned before, some snow will likely mix through as it progresses eastwards, but no significant accumulations are expected.

Over the heaviest band in the southwest corner of the province, it will likely be a decent soaking, however, with 10-20 mm of rain possible.

With the shift southwards, the southwest corner of the province will be spared from the 5 to 10 cm we suggested was possible in our earlier forecast. The closer proximity to the border has the precipitation falling in warmer conditions, causing that snow to fall as rain instead.

Winnipeg On The Edge

The forecast for Winnipeg continues to be difficult, with the city likely resting right on the northern edge of the precipitation. It seems most likely that the city will see some rain or snow beginning around 2 to 4AM and tapering off by 7 to 8AM. No significant accumulations are expected.

Still A Chance for Afternoon Showers

This disturbance won’t be completely gone for Saturday afternoon, with a chance for showers re-developing over the Red River Valley mid- to late-morning and persisting until mid-afternoon. Temperatures will be warm enough that snow won’t be a concern, but 2-4 mm of rain will be possible under the “heaviest” band of showers. The chance for rain should remain south of Winnipeg.

With the shift in timing for this system, daytime highs will be slightly higher than we forecast earlier. With the higher intensity precipitation finished by mid-morning, highs will be able to climb a bit warmer into the 6 to 8°C range instead of near 5°C like we advertised before.

The faster and more southerly arrival of this system means that the daytime hours on Saturday will see less precipitation than expected and allow daytime highs to climb a bit warmer. The heaviest amounts will fall along a narrow band in the southwest corner of the province with 10 to 20 mm possible through the and Saturday morning. The precipitation is largely falling as rain instead of snow, thanks to the slightly warmer temperatures aloft due to the shift southwards of this disturbance’s track.

Hopefully this covers what to expect; sometimes these systems progress a bit unexpectedly and all model guidance just…fails. This is one of those cases. We think the newer runs of rapid-update models are getting a good handle on it, though, so hopefully this forecast is able to hold up a bit better than the last one.