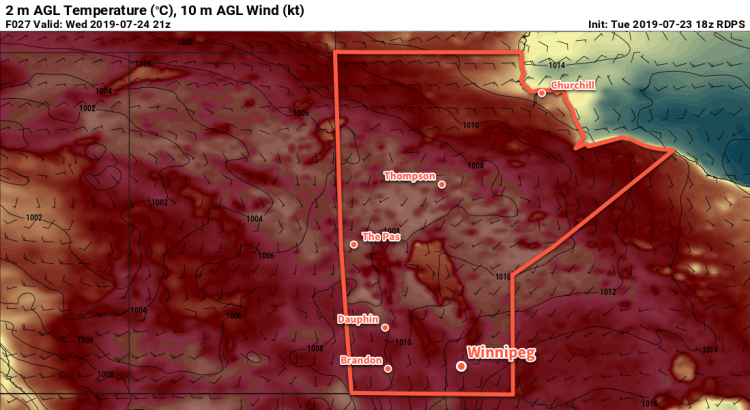 Winnipeg will see more heat with building humidity before a cold front passes through on Thursday, bringing a chance of showers or thunderstorms.

An upper ridge over the province will bring another hot day to Winnipeg. The city will see daytime highs near 30°C under mainly sunny skies today. Dew points will gradually rise through the day as southerly winds of 20 to 30 km/h draw humidity northwards. This will produce humidex values approaching the mid-30s this afternoon. The wind will persist out of the south tonight near 20 km/h with increasing cloud. This will result in a warm, muggy night with a low near 21°C.

There’s a lot of diversity in the model forecast solutions for Wednesday night. Some models have no precipitation for Winnipeg, while others sustain an area of thunderstorms from southern Saskatchewan into the region. Either way, if there is going to be any precipitation it likely won’t arrive in Winnipeg until early Thursday morning. The synoptic pattern isn’t particularly favourable for sustaining nocturnal convection, but if the thunderstorms in Saskatchewan can organize early enough, they may be able to last all the way to the Red River Valley. We’ll keep an eye on it, and we’d also recommend checking out Environment & Climate Change Canada’s take on it in their thunderstorm outlook, available in our bulletin viewer.

On Thursday, a cold front will push across the province early in the day. Behind the front, moderate westerly winds of 30 to 40 gusting 50 km/h will clear skies and usher in a drier air mass. Temperatures will still be warm with a high near 29°C, but the drier conditions will make it more comfortable. Winds will continue out of the southwest at 10 to 20 km/h on Thursday night. Temperatures will head to a low near 17°C with increasing cloud.

Friday will bring breezy conditions to southern Manitoba again as a low pressure system passes to the north. Westerly winds will pick back up into the 20 to 30 km/h range in the Red River Valley with mixed to cloudy skies. There will be a chance of showers with this system as well as moisture wraps around the low. Potential rainfall amounts amounts don’t look particularly significant; just light accumulations of a couple mm look possible. Temperatures will be cooler with a high near 25 or 26°C.

Skies will clear Friday night with diminishing winds. Winnipeg will see a low near 16°C.

Warm weather will return to the region on Saturday with highs returning to the 30°C mark with mostly sunny skies. Showers or thunderstorms will be possible on Sunday with a low pressure system forecast to move across southern Manitoba.