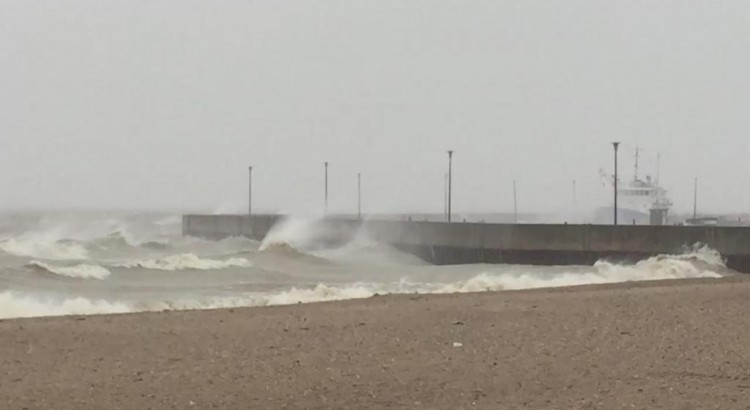 Southern Manitoba was slammed by a powerful Colorado Low this past weekend that brought a wide array of severe weather to the province. Between heavy rain, ice pellets, snow and very strong winds, the storm wreaked havoc on the regions infrastructure with widespread damage to trees, power outages, closed highways, structural damage and overland flooding.

The system was, fortunately, well forecast by Environment Canada with fairly accurate forecasts issued in the days leading up to it alongside special weather statements addressing the numerous impacts the system may have on the region.

Fortunately, the weather was able to hold for much of Saturday. Temperatures climbed into the low 20’s across Southern Manitoba with increasing cloudiness. Rain & thunderstorms developed through North Dakota & Montana and lifted northwards through the day, first spreading into SW Manitoba in the afternoon and then eastwards and northwards through the evening and overnight period.

Overland flooding at the cottages in Albert Beach, MB. Photo via @lovestormsMB.

Some of the hardest hit regions were in SW Manitoba where hours of training thunderstorms & convective showers produced moderate to heavy rain. The Melita region was hit the hardest with 72mm of the grand total 90mm of rain falling by midnight on Saturday night. For areas further east, through, much of the rain fell through Saturday night & Sunday. Total rainfall amounts for Saturday and Sunday combined were:

This rainfall is in addition to the 25–50mm of rain many areas in the region saw just a couple days prior to this storm. There were several areas that saw significant overland flooding due to the sheer quantity of water that fell over the short time frame.

Additionally, there were reports of sewage back-up and spotty basement flooding across Winnipeg.

Then Came the Wind

Sunday is where the brunt of the storm impact was felt. As the main low pressure centre lifted northwards into the Dakotas, a strong 1037mb high pressure centre was building into the central Prairies.

These systems produced a strong pressure gradient over southern Manitoba and produced some of the strongest, longest-duration winds for a major storm in recent memory. Winds were in excess of 50km/h for 20 hours in Winnipeg with a 6-hour stretch beginning late Sunday with winds of 60km/h or greater. Very strong gusts also accompanied the winds with Winnipeg recording the highest wind gust at 93km/h:

The winds may have been the most significant impact from this storm. The strong winds resulted in havoc on the highways, property damage, hundreds of downed trees, and widespread power outages. The strong winds also produced significant wave action on Lake Winnipeg and some overland flooding as rising lake levels resulted in the lake overspilling its banks and pushing inland in some locations.

Strong winds ripped the roof off of The Bridge Church in Winnipeg, MB. Photo via @CTVNewsBen.

Photo of a downed tree in Winnipeg, MB. Photo via @mikki_co.

High waves due to the strong winds associated with this weekend’s Colorado Low in Gimli, MB. Photo via @OlleBear.

Large tree down in Winnipeg Beach on Spruce Ave. Photo via @SeanLedwich.

Winds tapered off to 40 gusting 60km/h on Sunday night, but remained fairly strong until tapering off Monday afternoon.

If the rain and the wind wasn’t enough, cold air moving in with the high pressure system resulted in precipitation switching over to ice pellets then snow beginning over Parkland Manitoba and then spreading southeastwards through the Interlake, Red River Valley & Whiteshell through the afternoon and evening. Areas through the Interlake southwestwards towards the Melita region saw the heaviest snow, with MacGregor reporting the highest amount of snow at 15cm. Amounts of 10–15cm were seen from Arnes, on the western shores of Lake Winnipeg, through Teulon, MacGregor, Treherne and down towards Boissevain:

In Winnipeg, we saw just a few cm of snow on Friday evening and overnight. Flurries persisted through Monday but temperatures were warm enough to prevent any more accumulation.

A damaged fence alongside substantial snow accumulation in MacGregor, MB. Photo via @JBMEquiFarms.

A broken tree sits atop a damaged structure in Dunnottar, MB amidst a fresh coat of snow. Photo via @alan_tabak.

All in all, this was certainly one of the most powerful storms Southern Manitoba has seen in a good long while. Perhaps the best thing that can be said is that at least it happened now and not a month earlier, where almost certainly it would have been a historic blizzard.